Architects Juan Alberto Andrade and María José Váscones have transformed a Chevy van into a house-on-wheels for a young couple that includes a kitchenette, a fold-up dining table and a full-sized mattress.

The project, Dodo Van, involved the conversion of a 1993 van made by the American car company Chevrolet. The couple – a lawyer and an environmental engineer – purchased the vehicle for their travels and their work with local communities.

To oversee the conversion of the van, they turned to architects Juan Alberto Andrade and María José Váscones, who are based in Guayaquil and have also completed an office in the city.

The brief for the van called for creating a simple living environment within its five square metres of space, and under its 1.86-metre ceiling.

“The area conditions the space – developing a project that is flexible enough to adapt to different everyday situations and solving the basic needs of living,” the designers said.

The exterior was left mainly untouched. Within the van, the designers created a pared-down living environment that includes a kitchenette, a lounge space, a portable table for eating and working, and a sleeping platform for two people.

The van’s seating can accommodate the transportation of six passengers.

Service functions were incorporated into the long sides of the vehicle, behind the front seats.

“Design strategies were developed that allowed the space to be transformed into various configurations according to its needs, based on the decision to liberate longitudinal circulation and maintain the interior morphology of the vehicle,” the designers said.

Occupying the front portion is the compact kitchen, which features several cabinets and a sink. Small, triangular cuts in the cabinet doors enable them to be opened without the use of handles. One of the doors folds down and becomes a table or countertop.

Next to the kitchen is the living space, where the team placed a bench containing storage space. In front of this area is a large trunk that hides the van’s portable table, which has legs that can be easily taken on and off. 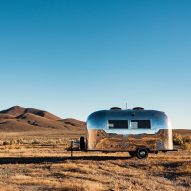 The rear furniture can be converted into a platform for a full-sized mattress.

“The mattress is custom made,” the designers said. “It involves three pieces that fold, making them easier to store.”

Interior walls are clad in six-millimetre-thick plywood, while 12- and 15-millimetre boards were used for the flooring and furniture.

A natural matte finish is meant to make the van feel more spacious. Mineral wool was used to provide thermal and acoustical insulation on the floor, walls and ceiling.

The interior is powered by an independent battery linked to the van’s alternator and a 110-volt transformer. The van has tanks for storing both clean and used water.

Other mobile dwellings include a 1960s travel trailer that Edmonds + Lee Architects converted into an office and crash pad for a tech entrepreneur, and a canvas caravan by Belgian designer Axel Enthoven that is shaped like the Sydney Opera House.

The photography is by JAG Studio.