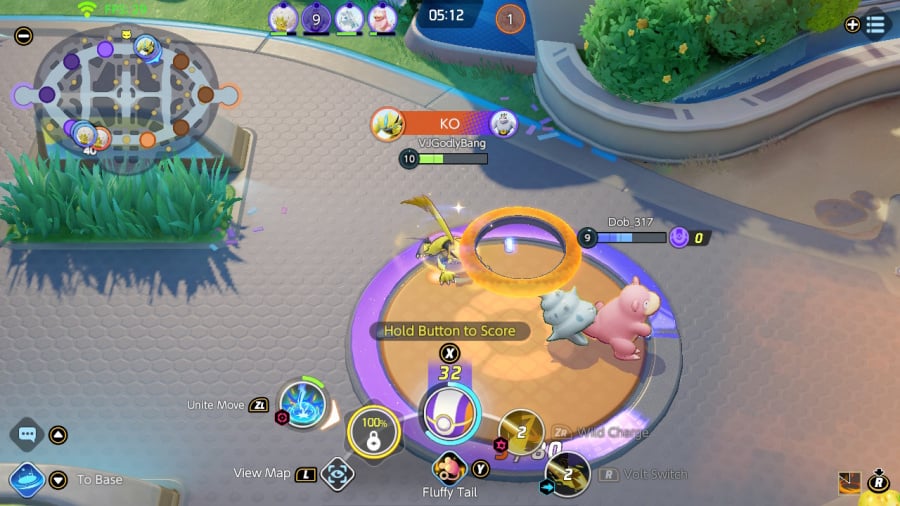 Since the original release of Pokémon Red and Blue on the Game Boy, The Pokémon Company has consistently tried to take its successful monster-collecting RPG through many different iterations, genres, and applications. Pokémon has taken forays into genres such as digital/physical card games, the Mystery Dungeon series, and ventured into the lives of what non-trainers do in the world with the Ranger titles. We’ve even seen Pokémon interactions brought into real life with the Pokéwalker and the augmented reality mechanics of Pokémon Go. This time, with Pokémon Unite, Pokémon has joined the Multiplayer Online Battle Arena genre, more commonly referred to as “MOBA”.

Pokémon Unite has a gentle learning curve that doesn’t require previous familiarity with MOBAs. From the get-go, the game teaches all of the main mechanics with the prolific electric mouse, Pikachu. Despite easy to grasp tutorials, though, the game does lack more crucial tips such as explaining undefended goal zones; these are goals players can immediately score inside by holding the button down. 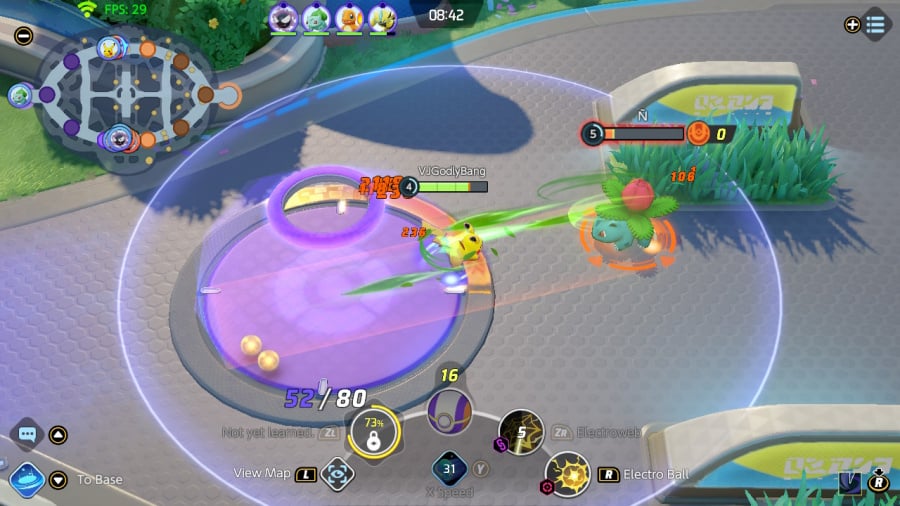 Unite follows a 5 vs. 5 online format – when 10 players are connected each individual chooses their Pokémon prior to the match. Unite’s default map, Remoat Stadium, has 10-minute matches split into three paths — top, bottom, and central. Both teams try to level up, gain experience, evolve by fighting wild Pokémon, and eventually skirmish with the enemy Pokémon to gain map control along with scoring points in each of the opposing goals that can be found in the top and bottom paths. The central path is mainly for fighting wild Pokemon and Zapdos when two minutes are left in the match, to gain huge points.

Players need to make constant decisions on approaching goal zones. Is it better to score several points in a quick fashion then escape to safety, or score a larger number of points with the risk of an enemy swooping in to disrupt attempts?

In terms of the roster as you start, initially it maxes out at 20 Pokémon with more to release in the future. The game is relatively generous with characters from the start, as logging in daily and completing missions allows you to rack up Aeos Coins, the in-game currency that can be used to purchase specific Pokémon.

Every Pokémon is divided into two groups for basic attacks: melee, and ranged. Melee Pokémon such as Machamp have high base HP, outrageous attack, and are able to take more damage to be explosive up close, while ranged Pokemon such as Cinderace are glass cannons with low base HP but can inflict a lot of damage from a distance. You can also break them down into five groups. Speedsters with strong mobility, attackers inflicting massive damage at a distance, defenders to protect teammates, supporters to heal or provide crowd control, and all-rounders that can excel both near/far. There will definitely be Pokémon for every type of player out there. Choose Pikachu and shock from the sidelines while ramping up damage with Electro Ball, or Zeraora to Slash at foes with a surprise attack and then escape using Volt Switch? 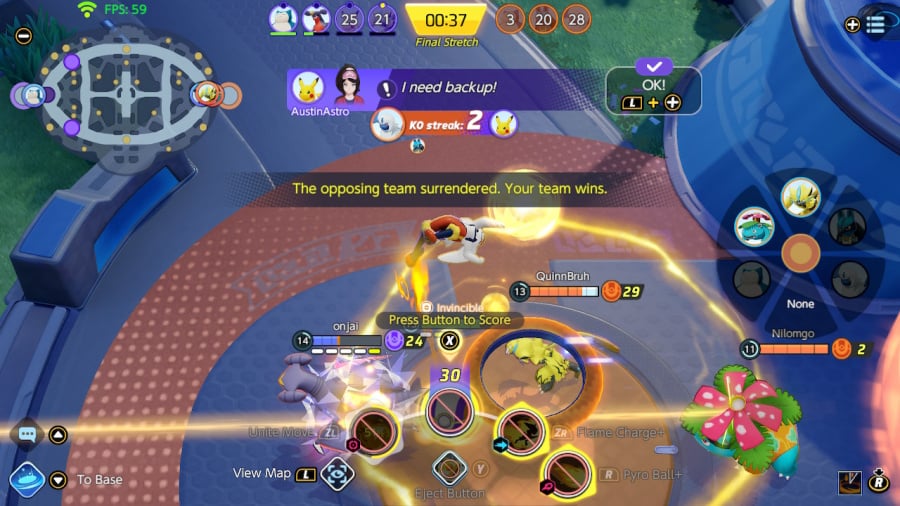 Some Pokémon can unleash boosted attacks that have timed cooldowns; these have various special effects. In addition there are special attacks; these are learned throughout the match upon reaching specific levels, with the player choosing a special attack to start the match. The choices of these moves cater towards the player’s own playstyle between preset options, so there’s scope to settle into your own approach to battles.

To return to your objectives in a battle, defeating both wild and enemy Pokémon gives Aeos Energy, which is dependent on the value of the Pokémon knocked out. Pokémon such as the starting Lillipup and Aipom give two points each, but tougher Pokémon like wild Audino give five points of Aeos Energy. You need this Aeos Energy to score points on the enemy’s goal, so it’s never just a case of attempting to dash straight to the goal. In addition defeating strong wild Pokémon such as Drednaw, Rotom, and Zapdos will give the entire team different buffs and benefits – working together with teammates is vital.

In terms of modes, Ranked play is unlocked at Trainer Level 6 with several conditions, but the main hurdle is amassing five ‘licences’. The game does give some licences in the first few days of playing, but for free players they might actually reach Trainer Level 10 before being able to play Ranked games. Ranked games go on for a season, and depending on ranks players will earn rewards at the end of the season. Ranked can be played with friends as long as ranks are close enough for the game to deem it acceptable. The actual matches are 10 minutes long and points double in the final two minutes, encouraging comebacks and to dissuade teams giving up too early. 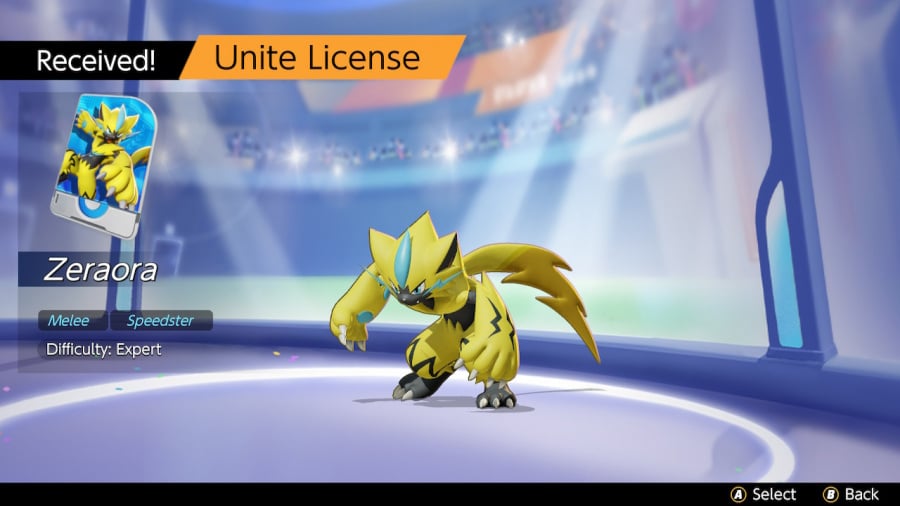 Quick matches are unlocked at Trainer Level 9. Quick matches are five minute matches with a rotation of three different maps. The three quick maps are Shivre City, a frigid, snowy 4 vs. 4 map; Auroma Park, a luscious green 3 vs. 3 map; finally Mer Stadium is similar to the default Remoat Stadium 5 vs. 5 map in Ranked/Standard, except the locale is a smaller scale allowing four players for each team. Quick matches, due to their 5 minute length, give Pokémon faster opportunities to level up and evolve.

Levelling up, unsurprisingly, is the big focus. When Pokémon reach a certain level they unlock a Unite Move, which is immensely powerful. Evolution is also at the forefront of gameplay, another key to learning more powerful moves. Aiming to evolve as quickly as possible will tip the scales in a Pokémon’s favour when facing off against opponents at an earlier evolution. There are other aspects such as hiding in bushes, in classic Pokémon style, and attempting to teleport to safety. There’s plenty of strategy to master.

As you’d expect of the genre there are various factors designed to give you an upper hand. Held items can be acquired for boosts, but they also represent the start of some of Unite’s issues. For one thing the game does a poor job of explaining the benefits of different items, so you may waste in-game currency of Aeos Coins and Tickets as a result. These items can also be upgraded and levelled up with Enhancers, which you can earn in daily or weekend missions. While you can earn key increases through time spent, balancing does become as issue as – unsurprisingly in a free-to-play game – you can spend real money on Gems or the Battle Pass to gain an advantage and level these items up faster. 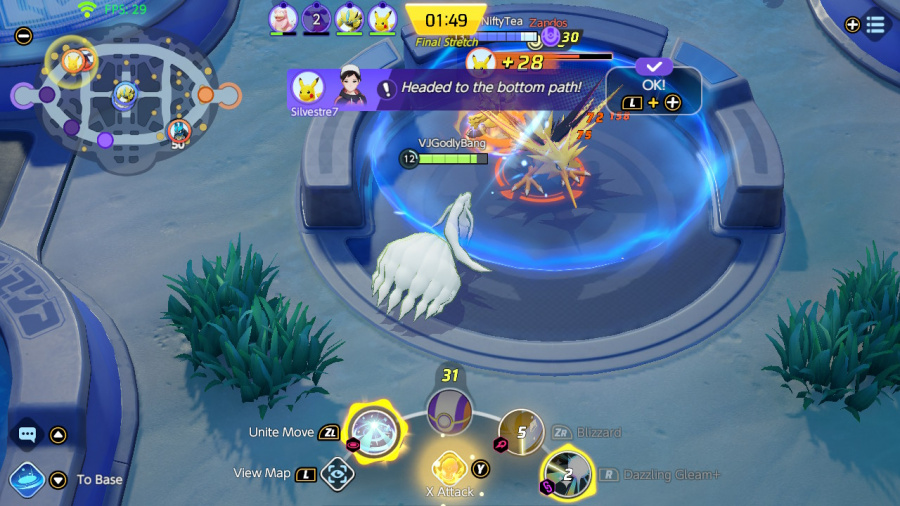 The benefits of levelling up more rapidly certainly add a ‘pay to win’ feeling to proceedings. It is disheartening that the catch up rate between free and paying players presents such a wide gap. Players could grind for hours on end to upgrade one Held Item to level 10 or 15 – or spend $100 from the start to purchase Item Enhancers to max out several Held Items along with purchasing characters. There’s certainly a danger of online contests becoming extremely difficult for those trying to level naturally without paying real money on boosts.

The inevitable Battle Pass grants cosmetics, extra Item Enhancers for Held Items, and Aeos Tickets which can be exchanged for useful items. It’s the nature of the free-to-play model, but is does feel like the game steadily coerces players to spend money through different means, with a fear of missing out on the optimal experience otherwise.

Your mileage – especially in terms of playing for free – will certainly vary; especially as you face increasingly powerful opponents online. Another notable flaw, especially for a team-based game, is that Unite lacks ways to communicate with the team outside of preset indicators, which can cause issues due to multiple notifications going off all at once. The screen can get bogged down, and it is difficult to decide on objectives. Sometimes it becomes visually problematic to parse information, and such limited communication options with teammates adds to the issue. If playing with friends you can, of course, use another service to chat, but once again it’s not an ideal solution.

7 Tips for Retirement Saving After 40