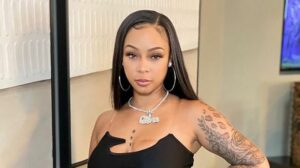 Many on Instagram are mourning the loss of model and social influencer Mercedes Morr, who died in a possible murder-suicide over the weekend.

Police found the body of 33-year-old Janae Gagnier, known by her Instagram persona “Miss Mercedes Morr,” at her Houston home at approximately 4:30 p.m. on Sunday, Click 2 Houston reports. The body of a man, identified as 34-year-old Kevin Alexander Accorto, was also located inside the residence.

Accorto is believed to be the suspect in Gagnier’s killing, police say. They are investigating the act of violence as a possible murder-suicide committed by Accorto, a Florida resident.

“What I thought was safe it seems is not,” said neighbor Roderick Shaw. “We have so many rules and so many guidelines I would never expect someone to breach our security and someone be murdered on this property.”

Others in the community were left shocked by the violent act.

“It’s safe over here, we have the gates the fence, you got to have a code to get in a code to get out, I’m just in shock,” said Edna Swist, a resident in the area.

Celebrities have taken to social media to express their sadness over Gagnier’s passing.

“Rest in peace Queen,” Tory Lanez said on his Instagram story that included a photo he took alongside the model, The Sun reports.

Gagnier’s followers flooded her comments sending their prayers and condolences to the young influencer.

“Mercedez I’m so sorry, you did not deserve this at all,” one person wrote. “You had your whole life ahead of you.”

One of Gagnier’s close friends, HTown Ciara, thanked everyone for “all the prayers and calls in regards to Mercedes” while adding that her “parents are asking that you respect the family.”

“We know everyone is concerned. We will update when all the information is confirmed,” she added.