Photovoltaics and a rainwater harvesting system feature in a hockey stadium in Seattle that has been designed by architecture firm Populous and named after Amazon‘s Climate Pledge initiative.

Located near the downtown district, the Climate Pledge Arena sits within the Seattle Center – a 74-acre (30-hectare) cultural and entertainment district originally built for the 1962 World’s Fair. It is where the city’s iconic Space Needle is located.

The project entailed a major overhaul and expansion of an existing arena – the Washington State Pavilion, later known as KeyArena, which was designed by noted architect Paul Thiry and built for the World’s Fair.

The revitalised stadium, which opened in October, is home to the National Hockey League’s newest team, the Seattle Kraken, along with the women’s basketball team Seattle Storm.

The 17,000-seat venue will also be used for concerts and other large-scale events. The seven-level facility encompasses 740,000 square feet (68,748 square metres).

Populous was commissioned to design the stadium by the City of Seattle and the developer Oak View Group.

Amazon purchased the naming rights and opted to name the arena after the retailer’s Climate Pledge initiative, which calls on companies to be net-zero carbon by 2040.

While much of the project involved new construction, certain parts of the original building had to be retained due to landmark status. The team was required to preserve the building’s glazed facades and its hyperbolic-paraboloid roof, which consists of standing-seam metal and a concrete ring beam.

“The new construction required the 44-million-pound roof to be suspended above the site while the new arena was built underneath,” the team said. 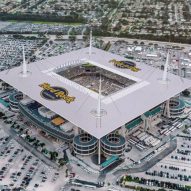 The original facility was about half the size of the new arena. To increase the amount of square footage, the team expanded downward. A large portion of the seating bowl is actually below grade.

Special features within the revamped arena include a 200-foot (61-metre) living wall and a pair of digital scoreboards that are suspended over the rink.

Each floor has a designated colour, ranging from light blue on the top level to a muted orange in the main concourse. Suite and dining spaces were designed by New York’s Rockwell Group and feature earthy materials like oak.

Architect Jason McLennan, founder of the Seattle-based International Living Future Institute, served as a sustainability consultant for the project and the arena has an array of sustainable features.

Power is provided by an on- and off-site solar array, along with energy purchased from other renewable sources. Water conservation measures include ice made from collected rainwater that is stored in a 15,000-gallon cistern.

Bolstering pedestrian access to the arena was a key concern for the team. In turn, the new facility is surrounded by a large plaza that provides year-round green space on the Seattle Center campus.

The outdoor landscape also features 67 leafy London plane trees that were planted for the 1962 World’s Fair and hold landmark designation.

“These trees maintain a massive canopy on the site, aid in carbon capture and connect surrounding neighbourhoods with the expansive Seattle Center campus,” the team said.

Populous has designed numerous sports facilities around the globe, including Florida’s Hard Rock Stadium, which features a shade canopy made from 15,400 tonnes of steel, and the Tottenham Hotspur Stadium in north London, which has a retractable pitch that can host both Premier League football matches and American football.

The photography is by Populous and Climate Pledge Arena.