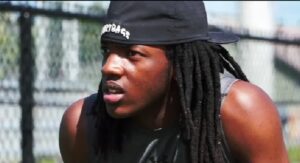 High school junior Tony Humphrey, who has already been recruited to play college baseball, has chosen to transfer out of his New York prep school following a racist encounter with a coach.

Humphrey, tells WPIX that the incident happened after the 16-year-old decided to join the track team at Iona Preparatory School during the baseball off-season. Last Friday, he was approached by an assistant athletic director, who asked why the Boston College-bound athlete had chosen to run track.

Humphrey explained that he wanted to increase his speed.

“And then he questions and says, ‘Well aren’t you already fast as is? And I said, ‘Yeah,’” the teenager recalls, “And then he tells me that I gained that speed by running from the police.

“That was racist,” Humphrey continues. “There was no reason for him to say that.”

The boy went home and immediately told his mother what had been said to him. He then decided to transfer from the prestigious all-boys Catholic school in favor of the public high school in his hometown of Cortlandt, NY – about 40 miles north of Iona’s New Rochelle campus.

“I decided to leave, because of my current situation, as I’m already committed. I’m already going to [college],” he explained. “I don’t feel like I have to stay at a program where they’re going to look at me different, or feel uncomfortable at a place I have to go to Monday through Friday.”

Humphrey added that he had encountered other instances of racism at Iona Prep during his freshman year, but had not received any support or resolution once he brought the incidents to the attention of school officials.

According to its website, Iona Prep – which bills itself as “Westchester [County]’s Premier College-Prep School” – prides itself on developing “young men into moral and ethical leaders who are dedicated to Christian service and who strive for spiritual, intellectual and physical excellence.”

On Tuesday, the school sent a letter to parents in which it acknowledged the incident, decried the comments made as “going against the very mission of the school,” and revealed that the unnamed faculty member had chosen to resign.

The 11 Best Etsy Sales To Shop During Small Business Saturday