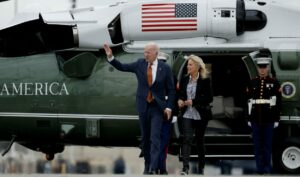 Use of President Joe Biden‘s new $217 million helicopter has been delayed for the fourth time amid concerns at the Pentagon about the aircraft’s reliability during emergency missions.

In a recent report, which was obtained by Bloomberg, the presidential helicopter – one of 23 VH-92 choppers recently purchased by the U.S. military – failed “to meet the reliability, availability or maintainability threshold requirements.” The report added that the aircraft could be trusted on “administrative” trips like taxiing the president from the White House to Camp David.

However, during testing, the helicopter had a recurring issue with correspondence delays due to failures from the communications system at the start of emergency missions. Speaking on condition of anonymity, a government official said that the Biden administration is still deciding whether to move forward with scheduling missions for the helicopter.

According to Business Insider, the presidential helicopter was supposed to be ready for use in July, almost a full year since it’s originally scheduled June 2020 flight date. That date had been pushed back to January 2021.

In March, the Pentagon and manufacturer Lockheed-Martin were still trying to resolve an issue that caused the helicopter to burn the grass underneath it during landing.

The presidential helicopter is part of a $5 billion deal that would see the VH-92s replace 11 Sikorsky VH-3D and eight VH-60N helicopters. Once the military is able to confirm the fleet’s operational capabilities, the White House Military Office would then decide when each aircraft would enter service for presidential-transport.

The helicopters would carry the call sign “Marine One” anytime Biden is aboard.

According to Maj. Jorge Hernandez, a spokesperson for the Marine-aviation deputy commandant, the office in charge of the VH-92 program office “cannot speculate as to when” the White House will authorize missions to start.

As of now, no missions have been scheduled using any of the helicopters in this fleet. It is unclear if they are even being for the administrative tasks that have been cleared.

These 5 Products Are On Sale