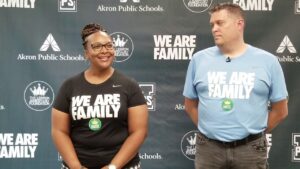 The principal at LeBron James’ I Promise school in his hometown of Akron, Ohio, is resigning amid an investigation into allegations that she slapped a student in the face.

On Monday, the board for Akron Public Schools will vote on the resignation letter submitted by Brandi Davis, Akron Beacon Journal reports. Davis’s resignation comes after she was placed on leave in September following allegations she slapped a child for swearing.

The mother of an 11-year-old boy claims Davis called her to tell her that she hit her child and that her son came home with a busted lip despite wearing a face mask when the alleged incident occurred.

Why would you put your hands on my child?” the mother recalls asking the principal. “She said she just reacted and slapped him.”

The mother recalled receiving a text message asking her to pick up the sixth-grader from the school in late September. Soon after, the parent says Davis called her personally to let her know that she had slapped the boy in the lunch line after he used profanity when describing how messy the boy’s bathroom was.

Details into the pending investigation remain unknown while Davis remained on administrative leave ahead of her resignation letter.

There have been two interim principals at the school since Davis’ leave. Anthony Lane is currently serving as the school principal and, for now, will remain in the position.

Davis served as the inaugural principal at James’ school since its opening four years ago. The school is a partnership between the Akron Public Schools district and the LeBron James Family Foundation. But Davis was hired by the district.

“We looked at you all as family,” the boy’s mother reportedly said of the school.

She demanded Davis to be fired from her position and said her trust with the school had been broken.