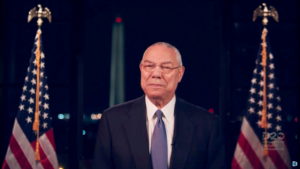 The private memorial service for Colin Powell will be held at the Washington National Cathedral. Peggy Cifrino, a spokesperson for Powell, shared details in a statement. The homecoming celebration will take place at noon on Friday, November 5. All guests must have a ticket to attend the event. Safety protocols will be in place to protect the well-being of all attendees. The public can view the service via livestream on The National Cathedral’s website.

“There will be very limited seating and it will be by invitation only,” Cifrino said, according to a statement provided to The Associated Press.

The Washington National Cathedral has been home to many Presidential funerals. Presidential services at the location include Ronald Reagan, Gerald Ford, and George H. W. Bush. Now, the cathedral will be a place to honor Colin Powell’s life.

“Beyond his military and diplomatic success, Secretary Powell became a universally respected North Star on the nation’s moral compass,” said the Rev. Randolph Marshall Hollerith, dean of Washington National Cathedral, in a statement. “[In] this moment of painful polarization, we mourn the loss of his idealism, his nonpartisan patriotism, his decency, and his call to put America above personal ambition.”

On October 18, Powell died from Covid complications, although he received the vaccination. He was 84 years old. His family reported that he was battling multiple myeloma. The NY Times reports that the “blood cancer hobbles the immune system and makes vaccines less effective.”

“We have lost a remarkable and loving husband, father, grandfather and a great American,” the Powell family said in a statement on Facebook.

Rev. Al Sharpton tweeted his condolences to the family and his respect for Powell.

“My condolences to the family of Colin Powell,” Rev. Sharpton wrote. “Though we disagreed on many issues, I always respected him and was proud of his achievements. When he and I ran into each other and conversed, I always left feeling he was a sincere and committed man to what he believed in. RIP.”

Colin Powell was born on April 5, 1937. In addition to serving as Secretary of State, he was also the youngest Black chairman of the Joint Chiefs of Staff. He served in the military service for 35 years before retiring in 1993. NBC 12 reported the Woody Funeral Home in Virginia has created a condolence book that the public can sign.

Why Toronto vanities are necessary for bathroom remodelling

How Ride To The Olympics Is Bringing Diversity To Equestrian Sports