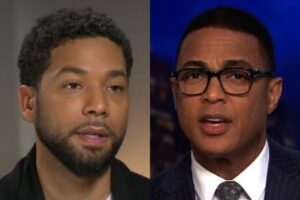 CNN is facing calls to fire Don Lemon after Jussie Smollett revealed the text messages he received from the news anchor during his trial for staging a hate crime.

While taking the stand on Monday, Smollett revealed the texts he received from Lemon during the early parts of the Chicago Police Department’s (CPD) investigation into his possibly fake hate crime attack in 2019, Fox News reported.

Smollett admitted to receiving texts from the CNN news anchor that relayed information that the CPD didn’t believe his account of what happened.

At the time, Lemon told CNN viewers that Smollett’s case was “personal” for him due to their friendship prior to the incident and how the Empire actor reached out and shared his recollection of what happened that night. Lemon said Smollett was “innocent until proven guilty,” and said the actor still “squandered the goodwill of a whole lot of people” in the event his accounts weren’t true.

While Lemon has yet to publicly address the revelations, conservative critics are demanding CNN fire the news anchor for his involvement in Smollett’s case, Newsweek reported.

“More activism by an ‘anchor’ at CNN,” The Hill columnist Joe Concha tweeted. “The network needs to now address this publicly as well. These texts from Lemon to Smollett came during an active high-profile investigation. CNN mum thus far.”

More activism by an “anchor” at CNN. The network needs to now address this publicly as well. These texts from Lemon to Smollett came during an active high-profile investigation. CNN mum thus far. https://t.co/2sWSMeM5bD

Smollett’s testimony received comparisons between Lemon and his former CNN “brother” Chris Cuomo, who was fired over the weekend for his involvement in his brother’s, former New York governor Andrew Cuomo, sexual harassment scandal, The New York Post reported.

Lemon ended his Monday night show with an update on Smollett’s case while making no mention of his role in tipping off Smollett.

Big jump in investors who favor crypto over stocks: Survey