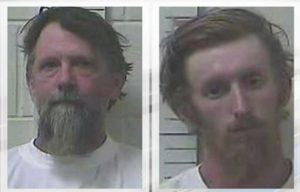 Two racist white men, a father, and his son were sentenced to four years in prison for a crime they committed with racial undertones last year in Mississippi.

According to The Associated Press, a white father and son were sentenced to spend four years in prison after being convicted for chasing and shooting at two Black teenagers taking a ride on all-terrain vehicles on a country road in Mississippi.

Wade Oscar Twiner, 49, who resides in Yazoo City, and his son, Lane Irvine Twiner, 23, of Jackson, were sentenced last Friday in Yazoo County. They were both found guilty by a jury of two counts of simple assault and one count of malicious mischief.

BLACK ENTERPRISE reported last year that the incident took place last September on Judkins Road in Yazoo County, Mississippi, a road used regularly by joyriders on ATVs, horses, and buggies. Police officers investigated the incident as a possible hate crime as the two Black teenagers were the only non-whites on that road and the only people on an ATV who were assaulted.

“Wade Oscar Twiner and his son Lane Twiner pursued them and tried to stop them and to shoot them and bump them with the four-wheeler, so they were charged with aggravated assault,” said Sheriff Jacob Sheriff at the time of the arrests.

As no one else on an ATV was assaulted that day, the sheriff said that was a significant factor in the hate crime charges.

The two white men reportedly told deputies they own land on both sides of the road and pay taxes. The pair believed they shouldn’t have to deal with people riding ATVs on the road since that’s against the law.

But, as one of the victims stated, that reaction might make sense to him if they had been trespassing—and not on the road and not in the vicinity of the Twiners’ residence.

The district attorney’s office stated that the penalty for each simple assault conviction was increased due to the men’s actions as they were deemed hate crimes under Mississippi law. This classification allowed for stronger penalties due to crimes motivated by the victim’s actual or perceived race, color, ancestry, ethnicity, religion, national origin, or gender.

See What It's Like To Control IG-88 In Star Wars: Tales From The Galaxy's Edge