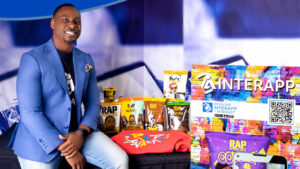 The popular brand in the rap space has launched a partnership with InterApp Inc., the provider of the InterApp Augmented Reality (AR) platform. The new pact is geared to empower and delight hip-hop fans and fledging artists for the snack culture.

The experiences can include audio, video, animation, images, and other content. Users can track and measure audience engagement via the platform’s creator environment. In turn, that can help them identify which of those encounters provide the most value.

Rap Snacks has set itself apart from rivals with distinctive packaging. Its chips, noodles, and beverages showcase some of hip-hop’s most high-profile artists and icons, including Lil’ Baby, Cardi B, Migos, and The Notorious B.I.G., among them.

By uniting with InterApp, Rap Snacks says it can now offer media content, games, and rewards to the brand’s fans and supporters. Creatives can reportedly use the InterApp app to promote their own brands with AR experiences for printed promotional materials, apparel, and merchandise.

The InterApp mobile app can be downloaded via the Apple App Store and Google Play sites. Per a news release, it allows interactive AR experiences with Rap Snacks products sold in convenience and major retail stores nationwide, including Walmart and H-E-B.

InterApp CEO and co-founder Will Brown calls the new partnership a great opportunity.

“Rap Snacks taps into the entrepreneurial spirit of hip-hop on every level, from the packaging featuring legends like Master P and E-40 to its Boss Up Initiative. InterApp gives Rap Snacks fans a new way to enjoy exclusive content from their favorite artists but can also help the next generation of hip-hop entrepreneurs grow their brands and audiences from the ground up.”

You can gain more information here.