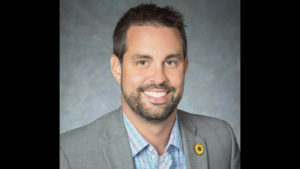 Kansas lawmaker Mark Samsel, accused of kicking a high school child in the testicles, has pleaded guilty to three misdemeanor charges and was placed on a year’s probation.

Samsel received probation for his actions as part of a deal he made with local prosecutors. Under the deal, Samsel is restricted from using social media for personal purposes and cannot have any contact with the student he kicked or another student who complained of an encounter with Samsel. The politician also agreed to write a letter of apology to both students.

Samsel, a Republican, said he demonstrated a kick to the groin on one kid but did not actually kick him.

According to ABC News, Samsel, who has been a member of the Kansas House of Representatives since 2019, said in a Facebook post “extreme” stress caused him to have “an isolated episode of mania with psychotic features” in a classroom.

The Kansas City Star reported that Samsel said he is receiving mental health treatment and forfeited his teaching license.

Samsel defeated Democrat Roger Sims in a landslide last November, receiving 77% of the vote. The politician earned a degree in political science, public administration, and business administration from Missouri Valley College and earned a law degree from the University of Kansas Law School in 2010.