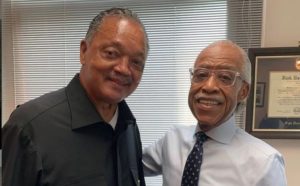 Rev. Jesse Jackson celebrated his 80th birthday at the National Action Network headquarters in Harlem, New York. Families and friends gathered at the location on October 22 to salute the civil rights leader. He turned 80 on October 8.

“In New York today with @real_sharpton,” Jackson wrote on Instagram. “So grateful to him for celebrating my birthday by hosting a birthday salute and book signing tonight. Cannot wait! #KeepHopeAlive! Feel free to purchase my newest book, “Keeping Hope Alive, Sermons and Speeches by @RevJJackson.”

In his latest book, Jackson shares his famous speeches and sermons that highlight pivotal moments in our nations history. He also reflects on what he has learned over the years.

“After all these years, what remains for me, is God is a source of mystery and wonder. Scripture holds up. The righteous are not forsaken. We’ve come a long way since slavery time. But we’re not finished yet. Running for freedom is a long distance race.”

For over half a century, Jackson dedicated his like to social justice, civil rights and peace. In 1984, he founded the National Rainbow Coalition. The organization merged with PUSH in 1996 and is now known as the Rainbow PUSH Coalition. As Founder and President, Jackson has played an active role in civil rights conversations. His activism has earned him many awards, including the Presidential Medal of Freedom awarded by Bill Clinton.

In August, Rev. Jesse Jackson Sr. and his wife, Jacqueline Jackson, 77, were hospitalized in Chicago. The couple was sent to Northwestern Memorial Hospital after testing positive for COVID-19. His wife was released from the hospital early September while he stayed at a rehab facility. The social justice icon received his first dose of the vaccination earlier this year. Jackson was also diagnosed with Parkinson’s disease a few years ago. He was released from the hospital after receiving treatment for Parkinson’s and COVID-19.

According to data from the Centers for Disease Control and Prevention (CDC), over 220 million people are fully vaccinated. Nearly 13 million people have received a booster dose.

After recovering from COVID-19, Jackson appears to be enjoying his birthday. He’s committed to fulfilling more his purpose, according to family and friends. The National Action Network Los Angeles posted a special message on Facebook to acknowledge his work.

“HAPPY BIRTHDAY Rev Jesse Jackson! National Action Network and Reverend Al Sharpton wish the Reverend Jesse Louis Jackson, Sr. a Happy 80th birthday. A mentor to Reverend Sharpton, Reverend Jackson has been a pioneering leader in the field of civil rights and political activism. In fact, he named NAN’s Headquarters, the “House of Justice.” We celebrate his life, his work and his ongoing legacy.”

Resident Evil Is Now A Part Of Fortnite