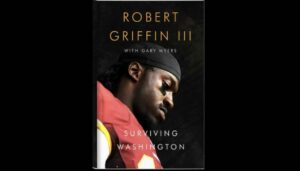 In a new memoir set to come out next summer, NFL star Robert Griffin III vowed to reveal the toxic nature of his time with the Washington Football Team, which he says included being the victim of sexual harassment.

Griffin announced the upcoming release of Surviving Washington with a video posted to Twitter on Nov. 30. Including the memoir’s Aug. 9 release date and a pre-order link via publisher Simon & Schuster, RG3 detailed what fans can expect from the new book.

“I’m going to tell you the truth about what happened in that playoff game in 2012 against Seattle,” he said. “I’m going to detail the medical mismanagement that I received during my time in Washington. I’m going to open your eyes to the sexual harassment that permeated the walls of that building, and give you a deep dive into a power struggle between one of the most powerful coaches in all of sports and an owner that many of you want gone.”

The truth will set you free.

According to the book’s synopsis, RG3 believes he never should have been cleared to finish the Jan. 6 NFC Wild Card game between the then Washington Redskins and the Seattle Seahawks.

“Late in the fourth quarter, his knee finally buckled,” reads the synopsis. “The entire stadium attendance fell silent as Griffin was helped off the field. In less than a year, he had gone from franchise savior to fallen star.”

Griffin’s announcement prompted many to believe that the sexual harassment allegations he would be discussing were tied to the 2020 investigation into rampant misconduct at the franchise.

News of the book even prompted a response from former WFT marketing coordinator Emily Applegate, who detailed the team’s attempt to buy her silence in a recent interview with the Washington Post.

Disappointed that you could have reached out to me directly to discuss the sexual harassment as we had a great working relationship and you witnessed some of the things i went through. Seems like our stories are being used to make you money. Would love to chat further offline.

Griffin promptly responded, assuring Applegate that he could only tell his own story and letting her know he was open to talk further. On Wednesday, the free agent reiterated in a tweet that the experiences he would be recounting were unrelated to those previously brought to light by a group of former employees.