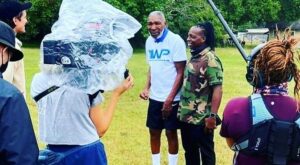 Richard Williams has been notably absent from the press and promotional tour surrounding his Will Smith-fronted biopic, despite Venus and Serena Williams’ support of King Richard.

The elder Williams has generally been less visible since suffering a stroke in 2016, but appears more frail in recent pictures posted by his son Chavoita Lesane, 48. According to the New York Post, Lesane has been his father’s keeper and caring for him since the stroke and has power of attorney for his father.

A new report by The Sun indirectly raises questions about Lesane’s fitness as guardian of the elder Williams’ affairs, in light of his extensive criminal past. However, Lesane has never been convicted of any of these charges, with most cases being listed as “abandoned” or “dropped.”

Richard is unquestionably loved by his kids.

Recently Serena posted a video of her daughter Olympia riding a bike with her Pop-Pop King Richard cheering her on.

Its unclear what Lesane’s relationship is with Venus and Serena: his most recent photo with either sister is from 2018, when he posted his eldest sister with his two sons.

The sisters do still seem to be in contact with their father, however. In a recent interview with Vanity Fair about King Richard, Isha Price – their older half-sister from their mother’s first marriage – detailed the family’s involvement with making the film and ensuring that the story of their patriarch was told accurately.

“He’d say, ‘I don’t know if I want them to do the film. I don’t want people to hate me,’” recalls Price who was the family’s main liaison to the production. “I’m like, ‘Daddy, first of all, we would never be a part of anything where people were going to vilify you [just] because they didn’t understand you. But we got to tell the truth.’ He said, ‘Oh, I always want you to be honest.’”

Who is Richard Williams' Son & Power of Attorney Chavoita Lesane