Earlier today, Ripple Effect Studios debuted Battlefield Portal, a new creative suite for players to essentially build the Battlefield match of their dreams. From pulling from previous games’ assets to being able to get silly like going a round with nothing but defibrillators, Portal offers a lot of freedom for players to enjoy. That being said, the Logic Editor requires a little coding goodness, so how easy it that for those that may be completely new to this sort of editing? Turns out, pretty easy!

Speaking with creative director Thomas Anderesson from Ripple Effect Studios, we wanted to know how easy a massive creation tool like this to use would be for coding “noobs” and what Ripple Effect is doing to make it enjoyable for all. “I don’t think it’s so much of a concern, as we don’t expect the logic editor and the depth of the logic editor to maybe be of interest to everyone,” said the creative director when we asked if there were any concerns about usability for Portal. “What we are offering is, of course, we expect a lot of people to come in and look at experiences. So giving more power, a little more advanced logic editor for the power users will allow for more interesting and unexpected experiences for the masses, if that makes sense. And I also there’s an in the builder portion of Portal, there’s, of course, aside from the logic editor, you have mutators, and settings that are very easy to tweak and very easy to set up. So I expect a lot of people to be able to curate and customize their server the way they want it without having to dabble in logic.” 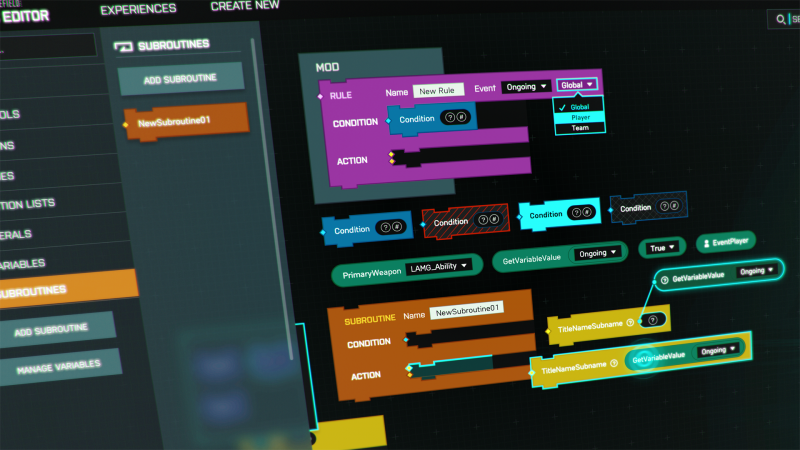 Ripple Effect Studios doesn’t expect players just to already know how to use this feature, so they are creating guides and tips for Portal users to utilize before diving all in. Anderesson confirmed that the studio has a few plans in the works to help players through using Portal, saying: “So in the website itself, there will be hints, we’re talking about videos, we want to, we wanted to have a robust set of tutorials and stuff ready for launch, so people can learn how to do this. And then of course, we’re hoping that the community takes over for things that maybe we have missed falling through the cracks, that kind of stuff, where maybe influencers, community, people set up their own tutorials for things and that people even share, I think Rob or Justin mentioned that you can actually copy the URL for your creation and get help for from the community in like, Oh, this doesn’t quite work as I expected it kind of I get helped to fix this. And through the tools you can, you can get other people to help you. It’s pretty cool.”

For those that may feel intimidated by the coding aspect: don’t be. When asked if he had any advice for those that may feel that the coding aspect might be a little too difficult, he responded, saying, “Oh, that even goes farther than a portal question. I think it’s easy to say I think there’s nothing really to be intimidated by, I think the system is robust enough for you to be able to experiment and see what happens when you do a certain thing. If people want to practice and look at this programming language before released, it’s based on something called blockly that you can find in various implementations. I know I saw something that I think makes code is what Microsoft calls it. And people can experiment with that on other platforms today. But it’s nothing to be afraid of if it’s not the most amazing experience. In the beginning, I’m sure people will pick this up fairly fast. And it’s based on a very kind of, in a human way you can think of it as When this happens, do this. And there’s plenty of options and things to choose from. But there’s no better way and get stuck in it. And just try things out, experiment, and play against AI. If you’re afraid that people will laugh at something that you created play against AI, it’s a safe, safe environment for you to test your creations.”

If Ripple’s answers put you at ease a little bit, don’t be afraid to dive into the new features that the studio is creating. To learn more about what Battlefield Portal has to offer, including how it’s pulling from older games, check out the full reveal right here.