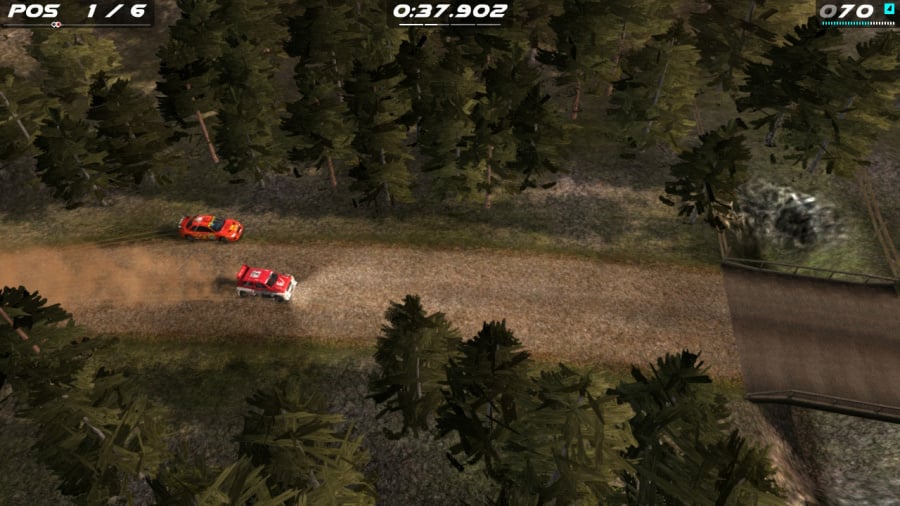 With each iteration of Rush Rally, the series has assuredly improved with more detailed cars and environments, sharper controls, and an overall cleaner experience. In hindsight, then, the original Rush Rally can seem a tad dated in comparison to later entries, so developer Brownmaster has gone back and effectively remade the original game with Rush Rally Origins. Delivering the improved graphics and audio seen in Rush Rally 3 whilst retaining the same arcade style gameplay of the original, Rush Rally Origins combines the best of both worlds, making this a worthy companion piece to Rush Rally 3.

Rush Rally Origins contains three core modes: Time Trial, Championship, and Race. Time Trial is your standard rally affair, pitting you against the clock as you race solo around various tracks. Championship strings the Time Trial courses together as a larger tournament, and Race sees you compete directly against several AI controlled racers. The variety of tracks on offer is impressive, with races taking place across Finland, Greece, Sweden, United Kingdom, Kenya, and New Zealand. Frustratingly, there doesn’t appear to be an option to pick whichever course you like at the start, so you need to take part in each course in the correct order, unlocking the new ones as you go.

The gameplay in Rush Rally Origins is fast and sharp. The handling of the cars varies slightly depending on which model you choose, but it’s relatively easy to get to grips with. Within just a few minutes, you’ll be sliding round corners with ease, a feat that can take considerably longer in other rally titles (looking at you, art of rally). As such, the game offers more immediate satisfaction and accessibility when compared to more realistic examples in the genre, but can potentially feel a bit limited as a result; once you’ve mastered the controls, it can subsequently feel like you’re simply going through the motions.

With vastly improved graphics compared to the original Rush Rally, this remake looks and sounds much better by modern standards. Despite this, however, the visuals are still slightly below par. There are a number of customisable options available, so you can set the graphical fidelity anywhere from Low to Ultra. Alternatively, you can go deeper and mess around with the specific options, such as anti-aliasing, shadowing, weather effects, and even the amount of trees visible around the track. We found the default option to be the best, with reasonably high detail at a target of 60FPS, but you can play around with this to suit your own needs.

Even at its highest graphical setting, however, Rush Rally Origins still makes some pretty severe compromises. When racing against AI opponents, the game oddly displays dirt effects for your own vehicle, yet absolutely nothing for your opponents; so sliding around corners and kicking up a load of dirt and dust looks pretty spectacular, but the effect is rendered a tad silly when everyone else is able to race around the track with nary a speck of dust in sight.

As a remake of the original, dashboard camera settings aren’t available here, either, so you’re stuck with the standard isometric viewpoint or a ‘helicopter’ alternative, with the camera panning around as you navigate the track.

All in all, Rush Rally Origins is a great little rally game if you keep your expectations of the graphics in check. From a gameplay perspective, it’s more than capable, and offers improvements over the original game in spades. Despite the easy vehicle handling, the game is nevertheless challenging with smart AI and strict time trial targets (which we’re told will be slightly altered in a patch, along with various other tweaks to visuals and performance), and is perfect if you’re after a fun, easygoing arcade driving experience.