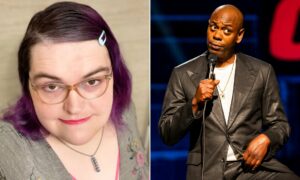 Terra Field, the Netflix employee who was suspended then almost immediately reinstated for attending a meeting meant only for senior executives following the release of Dave Chappelle‘s special, has left the company.

Field had drawn attention for a social media thread in which she criticized both Chappelle and Netflix for the harm his special, The Closer, was doing to the trans community.

“I resigned from Netflix yesterday, you can read my resignation letter below,” she wrote on Nov. 22. “I’m not happy that this is how things turned out, but I do think this outcome is the best for all parties involved.”

In the letter Field indicates that, on some level, her resignation is an act of solidarity with former colleague B. Pagels-Minor, who was fired from the company in October. Pagels-Minor, who had not been named at the time of their firing, is the employee who stood accused of leaking sensitive financial details to the press.

The two former Netflix employees had also filed a complaint with the National Labor Relations Board which accused the company of preventing employees from being vocal about their working conditions. According to the Wall Street Journal, Field and Pagels-Minor’s attorney, Laurie Burgess, says the situation has been resolved to her clients’ satisfaction.

“My clients, Terra and B., are very courageous and inspiring people and were able to shed light on an important topic in a thoughtful and meaningful way,” she said.

Netflix echoed Burgess in their own statement about the arrangement that resulted in the complaint being dismissed.

“We have resolved our differences in a way that acknowledges the erosion of trust on both sides and, we hope, enables everyone to move on,” said a company spokesman.

Despite protests at Netflix and elsewhere, The Closer has remained one of the most popular shows on Netflix since its release.

Gabrielle Union Explains Why She Doesn't Like The Term 'Step-Parent'