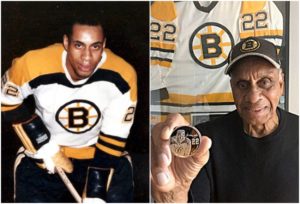 Willie O’Ree, 85, broke barriers when he made his debut with the Boston Bruins in January 1958. He played a total of 45 NHL games spanning two seasons with the Bruins. O’Ree was a special talent. He was blind in one eye due to an injury he had previously sustained, yet formidably competed for many years.

A call to honor the first Black National Hockey League Player has been successful.

The Hill reported that the Senate has passed a bill to award Willie O’Ree a Congressional Gold Medal with bipartisan support. Senators Tim Scott (R-SC) and Debbie Stabenow (D-MI) have been working on the bill since 2019. The bill will not go to the House for consideration.

As the sole Black player, O’Ree, also had a long career in the Western Hockey League, endured bigotry and racism from players and fans. Unfortunately, that behavior is still in play within the NHL and its fanbase, including racialized physical abuse by coaching staffs.

Earlier this year, Sports Illustrated highlighted the NHL’s racial reckoning. After Jacob Blake was shot in Kenosha, WI, American sports leagues all entered some form of protest. However, the NHL continued as usual until one of its few Black players, Evander Kane of the San Jose Sharks, called the league out on Twitter.

In 1998, O’Ree was chosen as the NHL’s diversity ambassador. He currently spearheads the Hockey is for Everyone youth program that he created.

In November 2018, O’Ree was inducted into the Hockey Hall of Fame for his accomplishments off the rink. He has helped develop 39 diverse hockey programs and inspired over 100,000 young people to take up the sport.

The National Hockey League is in full support of the Congressional honor.

“Willie O’Ree has been committed to hockey for decades and his impressive list of accolades and achievements is reflective of his dedication to inspire young people across America,” said Kim Davis, NHL senior executive vice president of social impact, growth initiatives, and legislative affairs.

O’Ree is certainly deserving of the honor.

Random: Hey, The Switch Is Also Getting A Flight Simulator Game This Week