Undulating panels of Corten steel create a woven effect across the facade of a seven-storey office block in St Petersburg designed by architect Sergei Tchoban.

Ferrum 1 is one of several buildings that Tchoban’s Germany-based studio, Tchoban Voss Architekten, has designed for the site of the former Rossiya factory in St Petersburg’s Polustrovo district.

According to the firm, it is “one of the first buildings in Russia to be constructed with a sculptural Corten steel facade”.

These weathering-steel panels feature on all four of the building’s facades, creating a grid around the square and rectangular windows.

The panels curve up and down and appear to overlap one another, creating a basket-weave effect. The three-dimensionality of the panels adds emphasis, meaning the effect is the same no matter the viewing angle.

“The sculptural façade is constructed in a geometric grid and presents itself as a coherent, dynamic, organically flowing fabric of loose ‘warp and weft’ threads,” said Tchoban Voss.

“Three-dimensional stripes span the rectangular building both horizontally and vertically. The alternation of flat and protruding modules creates the illusion of a plaiting.”

To allow the basket-weave pattern to take centre stage, the structural glazing is highly minimal with slender frames even at the corners.

Inside Ferrum 1, the rusty orange hues of the Corten steel are replaced with the golden tones of the aluminium panels that line the entrance lobby. This space dissects the centre of the building, creating two evenly-sized ground floor offices on either side.

The upper levels contain smaller offices, organised around central corridors, but these spaces have been left bare so that occupiers can design their own fit-out.

The former Rossiya factory site has housed a variety of establishments. Before becoming an industrial site, it was home to a country palace designed for Prince Alexander Andreyevich Bezborodko at the end of the 18th century.

It briefly also served as a health resort for St Petersburg’s wealthiest residents. 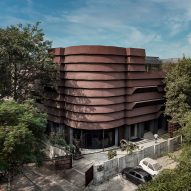 The site has been under development for over a decade. Tchoban Voss’s other buildings on the site include office complex Seasons-Ensemble, the Five Stars residential blocks and commercial campus Benois.

The studio is also building another block to sit alongside Ferrum 1, called Ferrum 2, which will boast an identical basket-weave facade.

Sergei Tchoban was awarded the European Prize for Architecture in 2018.

As well as his work with Tchoban Voss, he also has another studio, SPEECH Tchoban & Kuznetsov. His projects include the Museum for Architectural Drawing in Berlin and the Russian Pavilion at the Milan Expo 2015.

Photography is by Ilya Ivanov.