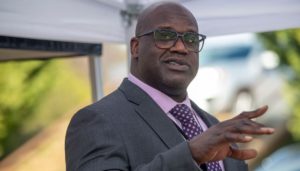 Former NBA Hall of Famer and current TNT commentator Shaquille O’Neal may be one of the most astute businessmen after leaving the sport as a four-time NBA champion. O’Neal has just made a business move that will add money to his pockets, increase his visibility and add to the powerful brand he has created.

WynnBET, which touts itself as the premier mobile sports betting app from the global leader in luxury hospitality, Wynn Resorts, has just announced earlier this week that the 15-time All-Star, and entrepreneur has become the new brand ambassador for the app.

Included in his exclusive partnership with Wynn Resorts, O’Neal will also join the company as a strategic consultant.

Now that O’Neal has taken on this partnership, the new WynnBET brand ambassador will be selling the ownership stake he has in the Sacramento Kings, in order to comply with NBA rules.

According to Celebrity Net Worth,  the former Los Angeles Lakers player paid approximately $5 million for a 1% stake in the NBA team back in 2013. At that time, the Kings were worth around $530 million. Currently, the NBA franchise is worth $1.8 billion. That would amount to roughly $11 million for O’Neal.

“I love working with my friends at Wynn Resorts and I am so excited to take WynnBET to new heights,” said O’Neal in a written statement. “Mobile sports betting is having a major moment, and I believe that WynnBET will be a powerful force in the industry.”

O’Neal will also be featured prominently in future advertising campaigns for the WynnBET app. He’ll be seen and heard across TV, digital and print. O’Neal will be attending events where he will interact with fans and create original content with WynnBET. This partnership also includes O’Neal launching “ShaqPot,” a Free To Play (FTP) game that will be housed inside the WynnBET app.

“Shaquille O’Neal has been a great friend of Wynn Las Vegas for many years, and we are thrilled to expand our relationship with him through a partnership with WynnBET,” Wynn Interactive CEO Craig Billings said. “A successful businessman, NBA legend, and one of the most well-known personalities in sports media, we believe our players will enjoy interacting with him through the WynnBET app and are excited to feature Shaq in our advertising campaign set to debut later this summer.”