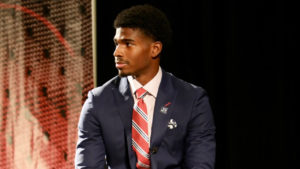 Following in the footsteps of his NFL Hall of Fame father, a young football player has already made history in the first year of his collegiate career.

Jackson State University quarterback Shedeur Sanders, son of Deion Sanders, has won the 2021 Stats Perform Jerry Rice Award, given to the national freshman player of the year in Division I college football football championship subdivision (FCS). The younger Sanders is the first HBCU player to win the award.

Shedeur won the starting quarterback job in the summer. With Deion as the head coach, the pair helped Jackson State University win its first Southwestern Athletic Conference championship since 2007. This Saturday, the Tigers, who are currently 11-1, will play South Carolina State in the Celebration Bowl in Atlanta.

“I’m proud of him the way he’s played,” Deion Sanders told The Undefeated about the playmaking ability of his son. “The way he sees the field, the way he’s encouraged his teammates, the way he approaches practice daily, the way he gets on their butts when they not doing what they need to do. I’m just proud of his maturity and who he is on and off the field.”

During the season, Shedeur completed 248 of 361 passes (68.7 percent) for 2,971 yards and 28 touchdowns against five interceptions. He had a terrific160.5 passer efficiency rating (fifth in the FCS) and rushed for three more scores. He went over 3,000 yards and threw his 29th touchdown pass in the SWAC championship game.

How to Become a Babysitter or Nanny