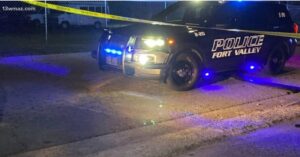 For the second weekend in a row, an HBCU homecoming has ended in tragedy as one man was killed and seven others left wounded outside of Fort Valley State University early Saturday morning.

The Georgia Bureau of Investigation reports the shooting happened at a party about two blocks away from campus. Peach County coroner Kerry Brooks tells 13WMAZ that 27-year-old Tyler French died around 3 a.m. Though he was not a current FVSU student, the school has confirmed that several students were in attendance at the party and were among the wounded.

The Macon, Ga.-based news station reports several people took to social media in the minutes following the incident, describing it as “a war zone” and urging others to check on anyone who might have been there.

A video of the incident was shared on Twitter by someone identifying themselves as a student at Alcorn State University student, but it is not clear if he was in attendance and captured the footage himself.

The school was temporarily placed on lockdown in the hours following the shooting. While those restrictions have been lifted, FVSU cancelled its homecoming parade, which had been scheduled for 9 a.m. on Saturday morning. 11 Alive reports the homecoming game will still take place in Fort Valley today, though with increased security measures.

Just last week, a similar incident happened at Grambling State University, disrupting homecoming activities and leaving the exact same number of deaths and injuries. That incident, however, did take place on the prestigious Louisiana school’s campus.

At press time the GBI had not released any details about those injured in the Fort Valley State shooting; nor have they issued any statements about potential suspects in the case.

Due to the number of people impacted, this tragedy becomes the largest mass shooting in Central Georgia in at least 10 years.

DMX May Possible Have A 15th Child, Woman Comes Forward

What Scandal?! Dave Chappelle Sells Out London Show, Hints At US Tour