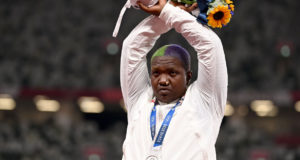 According to Reuters, after the United States Olympics shot putter Raven Saunders received her silver medal on the podium during the medal ceremony, she raised her arms in a gesture of an X above her head. Because of that gesture, The International Olympic Committee is investigating her actions, which they claim breaks its rules on athletes protesting at The Tokyo Olympics.

AP reports that during the photo opportunity at the medals ceremony on Sunday night, Saunders was asked what the gesture meant. She stated, “It’s the intersection of where all people who are oppressed meet.”

The International Olympics Committee has been in contact with World Athletics, the international governing body for the sport, and the United States Olympic and Paralympic Committee (USOPC). But, the USOPC stated that Saunders’ gesture did not breach its rules.

“As with all delegations, Team USA is governed by the Olympic Charter and rules set forth by the IOC for Tokyo 2020,” the USOPC said in a statement sent to Reuters. “Per the USOPC’s delegation terms, the USOPC conducted its own review and determined that Raven Saunders’ peaceful expression in support of racial and social justice that happened at the conclusion of the ceremony was respectful of her competitors and did not violate our rules related to demonstration.”

Realizing that The International Olympic Committee is investigating her, Saunders took to her Twitter with this response:

Let them try and take this medal. I’m running across the border even though I can’t swim ? https://t.co/B59N2v9KAk