Upon hearing the title of Slime Rancher: Plortable Edition you might be forgiven for imagining a dozy, snoozy farm simulator that bears a striking resemblance to Stardew Valley with some Dragon Quest Slimes and a first-person perspective thrown in. If that’s you, well you’re only half right, or maybe a quarter right. Slime Rancher is a tricky game to pin in a single box; it’s part Stardew, part Subnautica, and when you come across what few enemies there are, part DOOM Eternal. All right, we might be slightly overdoing it with that last one as all shooting is done to either feed things or lightly douse them in water, but we’re standing by it.

You play as Beatrix, a new rancher of Slimes who has to make a go of this new vocation by selling nondescript consumable ‘Plorts’ that any and all Slimes produce whenever they’re fed. Simple enough in theory, but there’s wrinkles upon wrinkles to contend with that make things far more interesting than such a simplified explanation suggests. 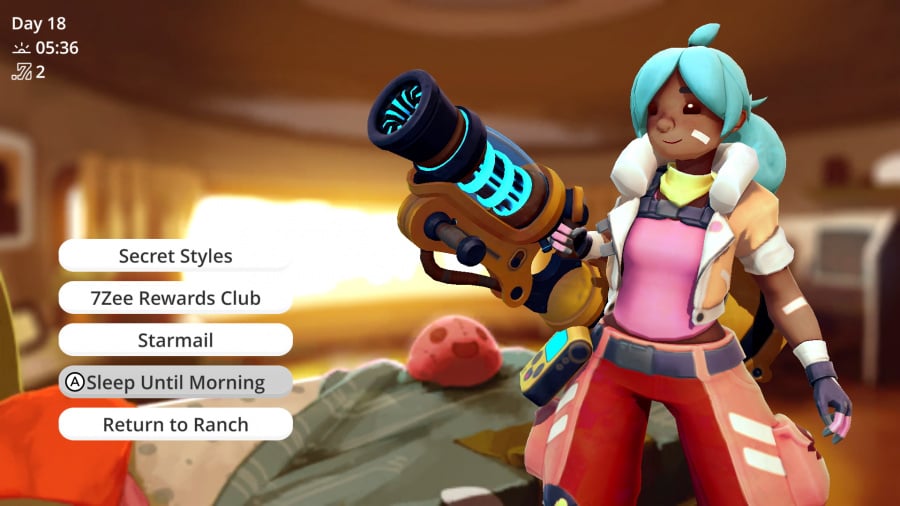 For starters, all the Slimes you’ll be utilising to make that cheese are out in the wild of the world, and what a world it is. At first your explorations make it seem a bit pokey, but as you progress you’ll soon come to realise that the entire landscape is simply massive, and the in-game map doesn’t really do it justice. We’re not talking Morrowind-level large here, but be prepared to have your expectations thoroughly shattered.

The Slimes you’ll be running into as you explore the swathes of land on offer come in a veritable rainbow of variety; you’ve got your bog-standard Pink Slimes, cat-like Tabby Slimes, radioactive Rad Slimes, and loveable docile Puddle Slimes to name just a few. Each different Slime has a different diet and favourite food from within that diet; Tabby Slimes are obligate carnivores much to the ire of the local chickens springing out of holes in the ground like they’re Tolkien-esque dwarves, Phosphor Slimes need juicy fruit, and Rock Slimes need vegetables to fill their digestive system.

As we suggested earlier, every time a Slime eats something from its diet it produces a unique Plort relevant to its type. It’s best not to think about what these might actually be — especially when we talk about Largo Slimes in a moment — but these Plorts are meant to be collected and sold at the Plort Market, and the price for each type of Plort is subject to fluctuations in a similar manner to the stock market. We can’t say for certain but we swear the more of a type of Plort we sold, the less it was worth the next day. It might seem insignificant but this brings in a clever new layer of strategy whereby hoarding Plorts for a day when prices are good is more than just a good strategy, it’s a way to the top. 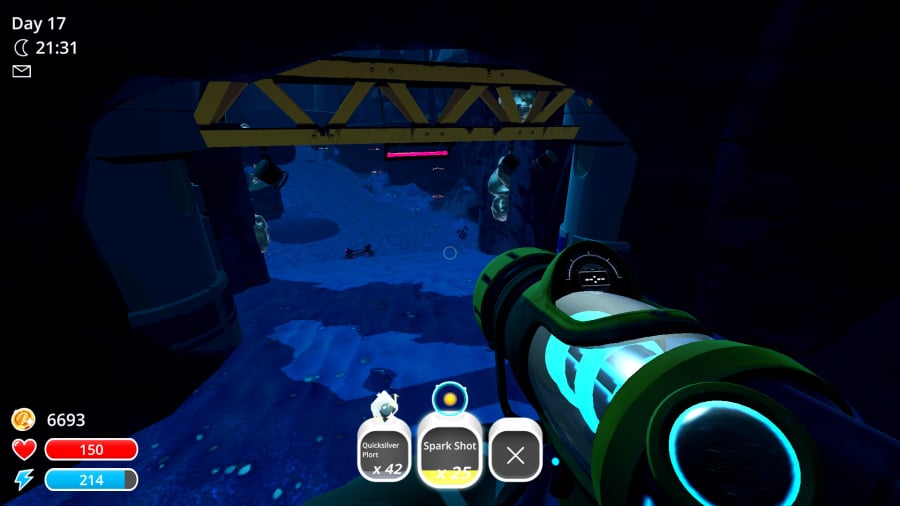 You can also increase your Plort output by letting a Slime eat the Plort of another Slime type (we told you). This produces a Largo, which is in essence a bigger hybrid of two Slime types, and produces both its source types’ Plorts at once, and widening their dietetic potential. This is fantastic news, of course, but it comes with a big honking bag of risk: should a Largo eat another Plort from a third type, its entire genetic structure comes tumbling down, turning the hapless creature into a Tarr Slime.

Tarr Slimes will eat just about anything, including other Slimes and – more worryingly – you. A single Tarr Slime can decimate an entire population, so the moment you catch even the slightest glimpse of one of these rainbowed tyrants, you’d better squirt it with a small quantity of water. That’s right, the greatest threat to your empire has the same weakness as the aliens from Signs.

Tarr Slimes are irritating out in the world, but absolutely cataclysmic on your ranch, which thus far we’ve barely mentioned. Your ranch is your home and the ideal location to house Slimes so as to better farm them for their valuable droppings, as well as grow food to feed them and storage silos to store all manner of wonderful things. You can even automate various parts, which is a nice touch, although we’d be lying if we said we wouldn’t appreciate some more variety of styles. You can expand into neighbouring areas in order to grow your slippery monopoly on the landscape, but just a little bit more customisability would’ve been welcome. 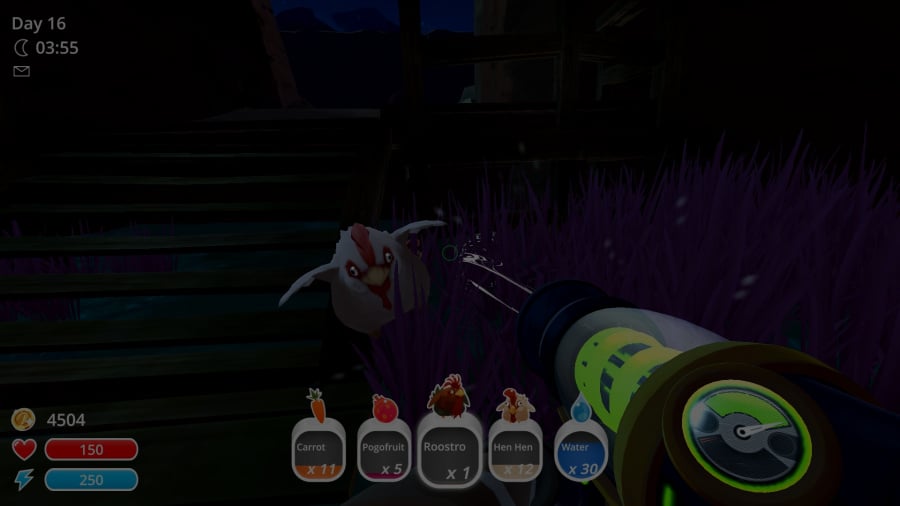 Despite this, the main gameplay loop exists almost entirely outside your ranch. Yes, you’ll need it to make mad stacks of cash to further expand and buy that jetpack you’ve always wanted, but the game is fairly flexible in how you approach it. When exploring you’ll find towering cliffs and platforms that seem purely aesthetic at first, but as you play more and more you’ll come to realise that these aren’t boundaries, they’re opportunities.

Slime Rancher is absolutely littered with non-linear possibilities, to the point that the otherwise necessary Slime Keys that you’d use to open doors can be rendered completely unnecessary through some clever platforming. The game knows it as well, and only ever tries to stop you in very specific circumstances, which is monumentally appreciated.

The only drawback of this is the eventual backtracking involved; as you acquire newer and more exotic Slimes you’ll have to cart them all the way back to your ranch by hand, which we can’t deny is a bit of a drag. You do unlock some shortcuts here and there, but a lot of the time the game expects you to do an awful lot of hoofing, which became a little tedious for us, even with the outlandish speeds Beatrix can achieve whilst sprinting. 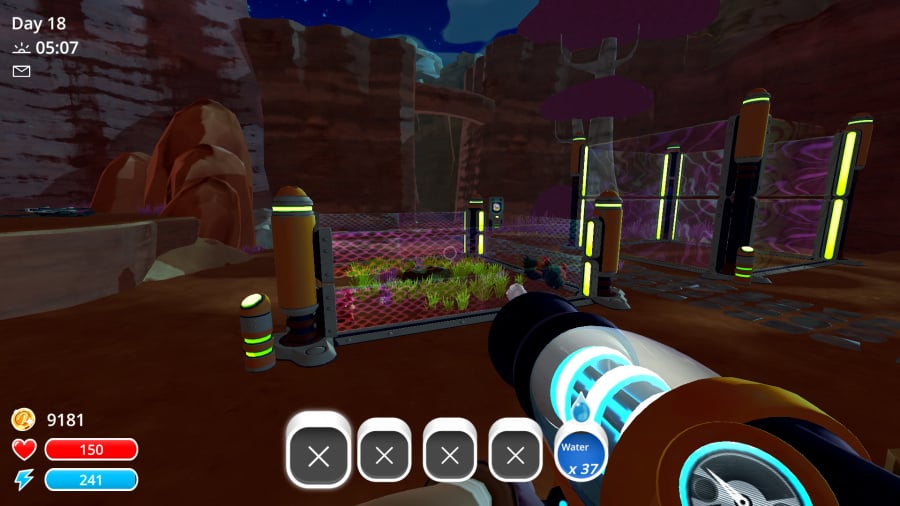 Despite this, when actually playing the game, we found it hard to put down. That incremental amount of progress you make every few minutes, the thrill of discovering a new Slime, the surprise at finding a new area tucked away somewhere you thought you’d explored to death — it’s a gentle, cumulative thrill.

But so many games plorted (sic) to the Switch can come with a multitude of limitations or compromises. Pleasingly Slime Rancher doesn’t seem to be showing any major downgrades whatsoever. Its graphics have been stripped back for sure, but it runs really rather well, achieving a crisp and clear resolution in docked mode, and fluctuating between 30 and 60fps a majority of the time, depending on what’s being displayed. We’d usually prefer a stable, locked frame rate over a variable one, but Slime Rancher manages to keep its head above 30 most of the time as long as you’re not in The Moss Blanket, so we feel it was the right decision.

Plortable play is also excellent. It’s not as crisp as docked, but performance is on par and the game’s controls still feel fantastic even with the tiny sticks of the Joy-Con. Technicals aside, it just looks good. Colours are bright, everything’s super easy to parse, and it’s hard not to feel uplifted by the feel-good nature of it all.

Slime Rancher: Plortable Edition is a title that doesn’t do the game justice. This isn’t a stripped-back Nokia N-Gage version of a grand game, this is the real deal, and it’s blinkin’ marvellous. Farming Slimes, exploring the world, getting frustrated at the price of Crystal Plorts never going up, it’s a dense and wondrous experience. Having to travel so much on foot stops it from achieving extreme greatness, but it’s not enough to stop us giving this a hearty recommendation.

15-Year-Old Student, Kemon Payne, Stabbed To Death After Melee On Third Day of School In D.C.