Let’s get this out of the way: watching Space Jam: A New Legacy feels a lot like watching a timeshare presentation run by every cartoon and comic character you’ve ever known. It has that same greasy “please give us money” feeling to it, as Warner Bros. parades its various intellectual properties past you like they’re showing you a catalogue of things to buy, and while you can technically leave whenever you want, you sort of feel like you should stick it out for another hour, at least. By the end, you’ll feel like you’ve been non-stop advertised to, and your eyes will be covered in a thin film of Batman after-images. It’s not good.

But this is a video game website, not a movie website, and I’m not here to tell you that Space Jam: A New Legacy is about as good a use of two hours as cooking and eating a Nike Air shoe, or that it trades the meta, fourth-wall-breaking humour of the original for uninspired, face-value references to cartoons you recognise in the hopes that it’ll trigger your nostalgia hard enough to make you think you’re having fun. I’m not even going to tell you that the movie attempts to make a point about the encroaching dystopia that comes from corporate media monopoly while doing the exact thing it’s criticising.

No, I’m here to tell you about how Space Jam 2 is the latest film to borrow from the multi-billion dollar game industry, because games are the hot new thing, but it falls short of ever really understanding what’s so great about video games, why people like them, and how people make them.

Spoiler warning for some of the plot elements of Space Jam: A New Legacy. 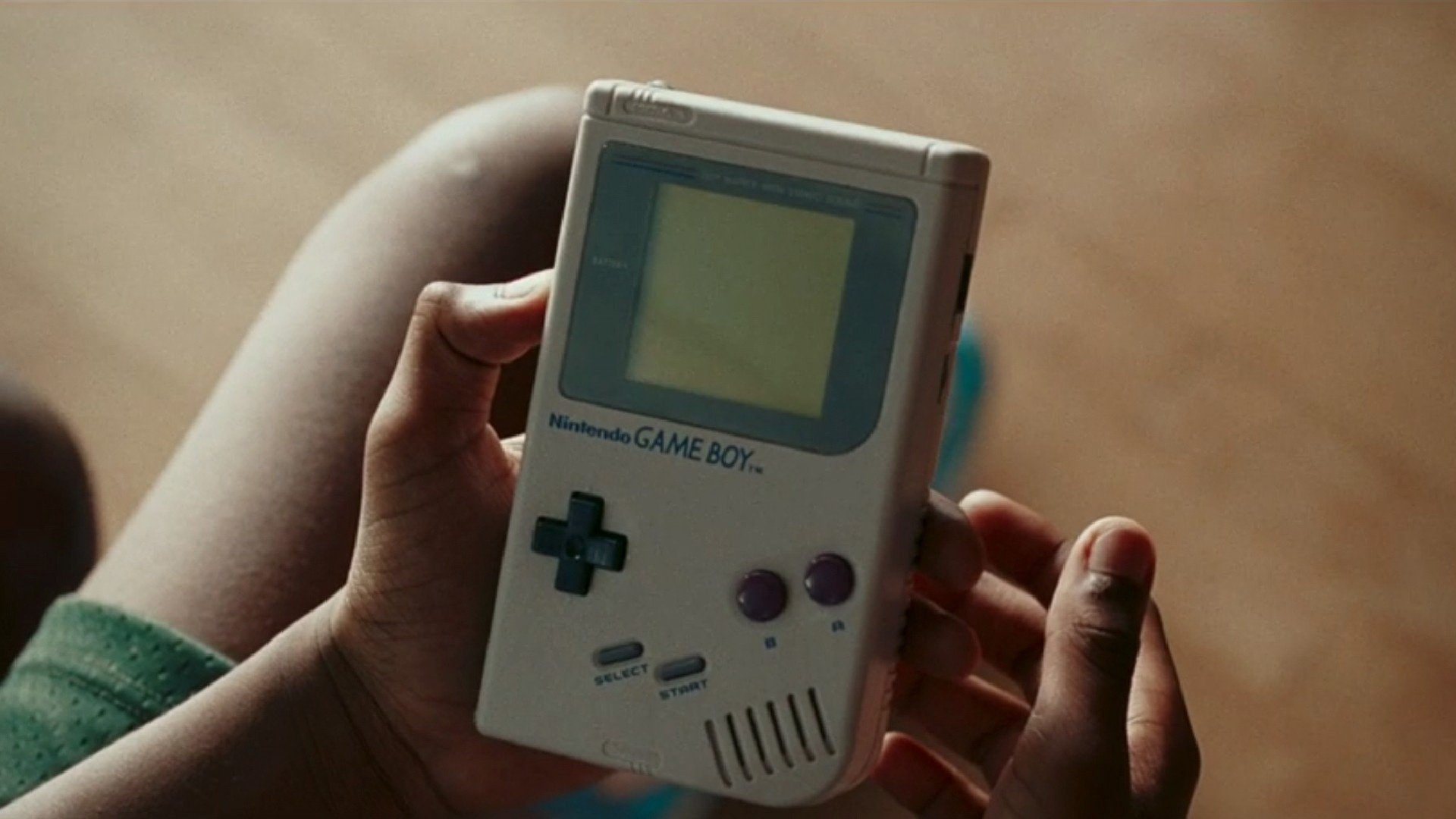 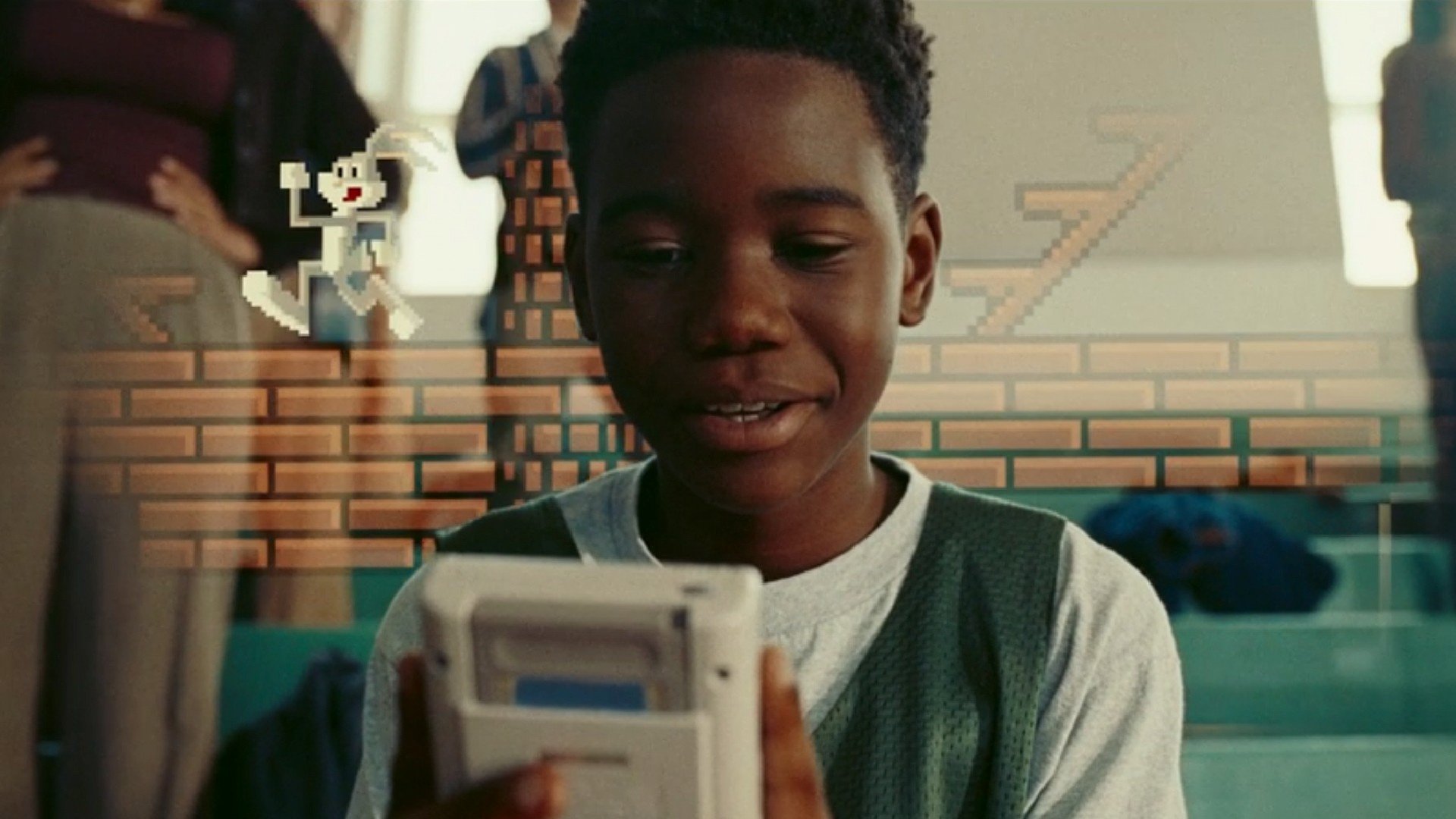 The movie begins with a child LeBron James, who will one day become a basketballman, being gifted a Game Boy by his friend just before a basketball match. He plays The Bugs Bunny Crazy Castle for about five minutes, his little child brain filling with dopamine and imaginary full-colour representations of the black-and-green game. But after losing the basketball game, his coach — apparently the kind of guy who loves making children feel guilty — tells wee LeBron that he needs to “get his head in the game” if he wants to ever earn enough money to support his single mother.

LeBron throws the Game Boy in the bin. This is part of the breakneck shortcut storytelling in the first 25 minutes, because the movie knows you want to see the fun cartoons, not the setup; nevertheless, it’s painful to see if you’re a fan of the DMG. I can only hope that another child found it, since it’s right at the top of the bin, on top of a relatively-clean pizza box, and took it home to cherish it properly.

Fast forward to the present day, and LeBron has kids of his own. One of them, Dom (played by Cedric Joe), loves video games, and even makes them in his bedroom. This is the bit where I paused the film and went to rant at my partner — who is a video game designer making his own game — because the portrayal of video game development is terribly silly, and I love a good rant.

Now, I’ll happily admit that video game development does not make for good viewing. It’s boring to watch, it’s slow, and it largely involves tweaking variable names and adding semicolons to the end of lines. Even the exciting bits are only exciting when you know what’s happening, like 3D modelling or rigging or animation or basically anything that involves words like “eye bones” and “skin weight”. I do not blame movie makers for wanting video game development to look sexy and interesting, which they definitely do in Space Jam 2.

But this kid — who is somewhere between 8 and 14 years old, I am not good at guessing these things — is able to make a networked online game from scratch with fully-animated UI, detailed characters, and a crowd. Every single thing I just mentioned is enough to give any one game developer sweats, let alone trying to do ALL of them. And also being ten-ish. And also your dad, who is a basketball millionaire, thinks games are stupid.

Clearly, Dom James is an unappreciated Mozart of video game development, and one day, he will get snapped up by Ubisoft. But for now, he must play basketball to impress his dad, who you think would have had enough of basketball for one lifetime.

Later on in the plot, we meet the villain, Al G. Rhythm (Don Cheadle) — that’s not much of a spoiler, he’s very obviously evil from the get-go — who is dressed like a living statue, and is somewhere between an evil computer and a complete misunderstanding of what an algorithm is. He seems to exist as Warner Bros.’ guiding light, with all their ideas coming from his algorithmically-generated suggestions, which is one step ahead of generating all their movie ideas by typing in “what is good movie idea” into Google and seeing what the results tell them.

Apparently, the algorithm thinks that the most bang for Warner Bros.’ buck is to turn LeBron James into a CGI version of himself and clone him, for… reasons? LeBron says that this is the stupidest idea that he’s ever heard, which is both an overreaction (it’s hardly even an idea) and completely true. His son, the young video game designer, asks, “is it a heuristic algorithm, or a matrix variant?” which is supposed to make him sound smart, but is actually mostly meaningless techy buzzwords.

And that’s the main problem with Space Jam 2 when it comes to video games: it wants to reference them, but doesn’t quite understand them, past a surface-level grasp of which words to use. I can forgive a lot of it for gussying up the tedium of video game design, but I wish it actually did something with it. The kid is constantly talking about wanting to go to “E3 Game Design Camp”, but I wish they’d leaned harder on video games, or talked more knowledgeably about them.

At one point, the kid gets upset because his game glitches — although the representation on-screen is an operating system crash, not a game glitch — and his character gets deleted, which is not how crashes or glitches work. I know, I know: being a grumpy old man about inconsistent logic in a blockbuster movie is entirely pointless and will only serve to raise my blood pressure and lower my chances of relating to anyone under the age of 25, but still. I thought we left silly hacker tropes in the mid-2000s! Most people at least vaguely know how video games and computers work these days! 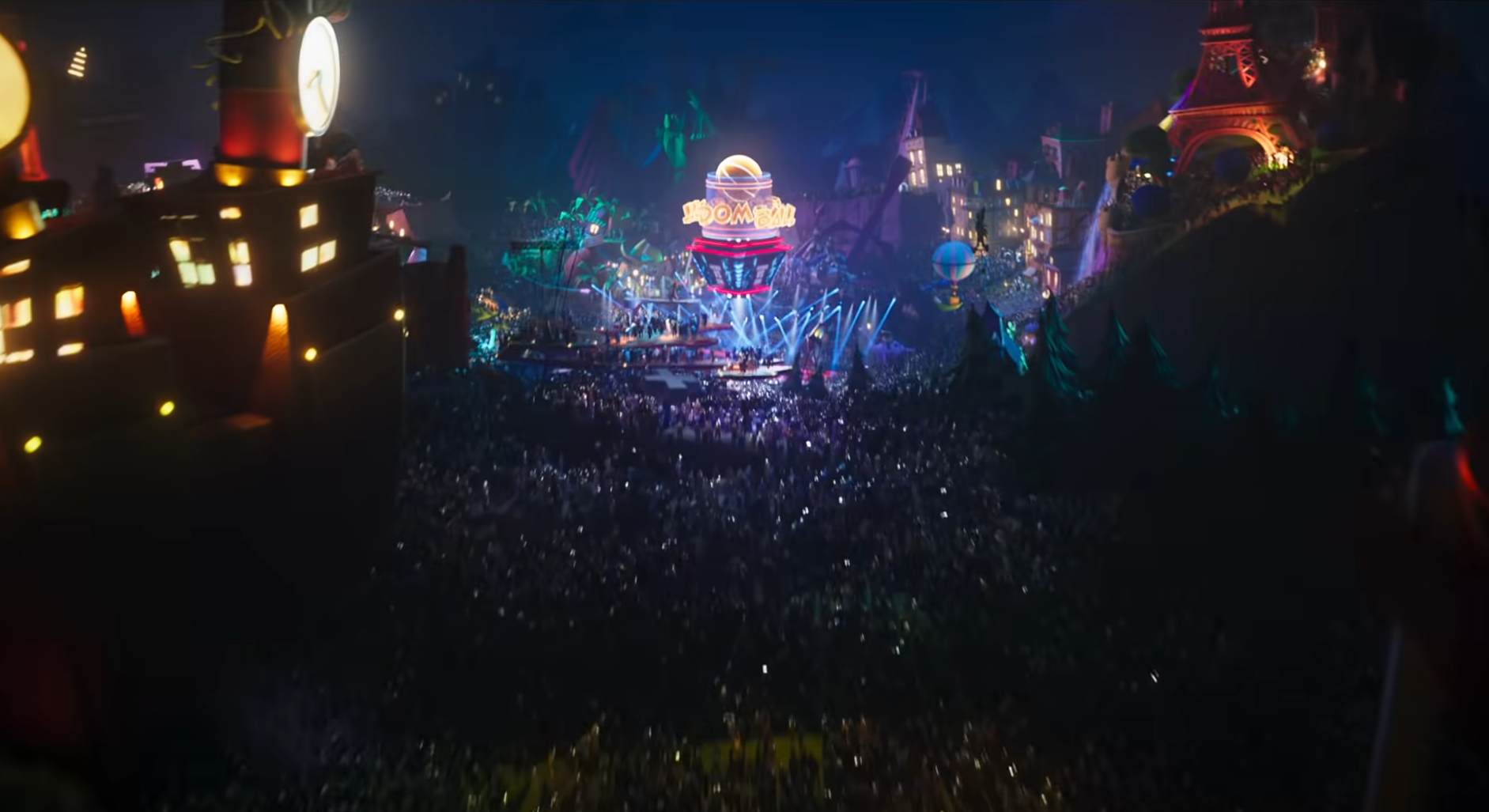 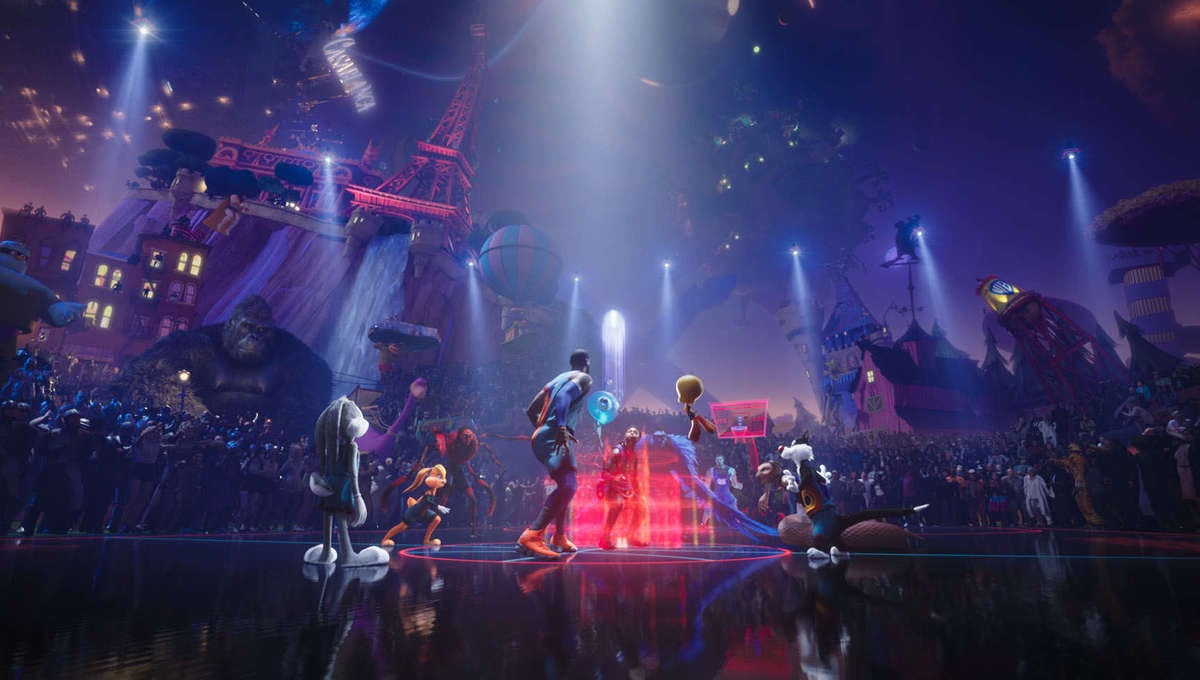 Domball, the kid’s video game, later gets turned into a real basketball game

In particular, kids watching this film who care about video games (which is presumably the target audience, despite a rather incongruous Clockwork Orange cameo later on) have almost definitely been immersed in game culture enough to know that this isn’t how games work, and having a plot point hinge on something nonsensical… well, it’s a movie about cartoons, basketball, and an evil AI, so nonsense is sort of the flavour of the day here, but internal logic should still exist.

Nevertheless, it’s exciting to finally see my career represented in movies to the point where I can complain about it. Marine biologists have had stupid shark movies for decades; astrophysicists have been able to gripe about space films ever since space was invented; and RIP to any historian who’s ever watched a film set before 1950. It’s taken ages to finally get representations of video games on the screen that aren’t just “someone playing Pac-Man at an arcade” or “the entirety of Tron”, and now we’re seeing entire movies based off of game design and algorithms!

Granted, there are other movies and TV shows that do it better — Infinity Train, Mythic Quest, Bandersnatch, and Russian Doll, to name a few — but still it’s a loooong way from how games used to be portrayed on screen, and it might even influence a new generation of future game designers.

So, yes, I’m mildly peeved at the video game inaccuracies of Space Jam 2. I’m far from the only one. But secretly, I’m thrilled to join the ranks of People Who Are Knowledgeable Enough About One Specific Thing That They Become That Guy At The Cinema Who Scoffs Loudly When They Get Things Wrong. It marks a more general trend: video games becoming extremely mainstream, to the point where they don’t really have to be explained.

And that can only be a good thing, right?

In Pursuit of a More Perfect Union' Coming to HBO