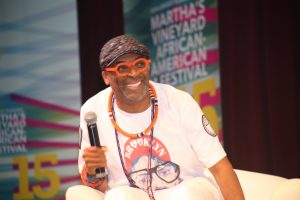 The four-part docuseries aired its first episode this past weekend on August 22, with the remainder of the series airing every Sunday after the initial episode until the actual anniversary of the 2001 terrorist attacks on Sunday, September 11.

In this series, the director explores life, loss, and survival in New York since the September 11 attacks that took place in New York City and Washington, D.C., in 2001.

As BLACK ENTERPRISE reported back in March, the multipart documentary showcases a sweeping portrait of New Yorkers as they rebuild and rebound in a city that suffered from a devastating terrorist attack 20 years ago through the current, ongoing global COVID-19 pandemic.

In a recent interview with The New York Times, Lee expresses skepticism about the government’s involvement with the tragedy that transpired on that fateful day of 9/11/2001.

Lee had been questioned about interviewing members of the conspiracy group Architects and Engineers for 9/11 Truth. The group believes that government officials had some involvement in the World Trade Center tragedy.

“Because I still don’t … I mean, I got questions,” Lee stresses. “And I hope that maybe the legacy of this documentary is that Congress holds a hearing, a congressional hearing about 9/11.”

“The amount of heat that it takes to make steel melt, that temperature’s not reached. And then the juxtaposition of the way Building 7 fell to the ground — when you put it next to other building collapses that were demolitions, it’s like you’re looking at the same thing,” he said. “But people going to make up their own mind. My approach is put the information in the movie and let people decide for themselves. I respect the intelligence of the audience.”

You can read the full interview here.