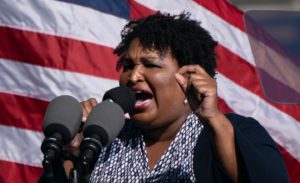 Voting Rights Advocate Stacey Abrams, who narrowly lost to current Governor Brian Kemp in 2018 amid voting suppression rumors, announced she will make a second run for the governor’s mansion.

A second run by Abrams was expected by many in the state. No other Democrat has announced or entered the race and with Abrams’ announcement, it’s likely none will enter.

The Spelman College and Yale graduate made the announcement in a two minute campaign video titled “One Georgia,” in which she outlined her time as a voting rights advocate during the last four years.

“Opportunity and success in Georgia shouldn’t be determined by your zip code, background or access to power,” Abrams said in a tweet. “For the past four years, when the hardest times hit us all, I’ve worked to do my part to help families make it through. My job has been to just put my head down and keep working — toward One Georgia.

”I’m running for Governor because opportunity in our state shouldn’t be determined by zip code, background or access to power.

Abrams went from being relatively unknown outside Georgia to becoming one of the most recognizable Black women in politics outside of Vice President Kamala Harris. After losing the 2018 gubernatorial race, Abrams started Fair Fight, a group promoting fair elections around the country, encouraging voter participation in elections, and educating voters about elections and their voting rights.

The group conducted voter outreach and education in the state as well as assisting many in signing up to vote. The group and Abrams were paramount in President Joe Biden winning the state and the 2020 Presidential Election.

Despite her popularity, defeating Kemp will be harder for Abrams the second time around. For starters Democrats now hold the White House and majorities in both chambers of Congress and midterm elections tend to favor the other side.

Biden’s approval rating has been falling in recent months as many Americans are exhausted due to the coronavirus pandemic and polling shows that most Americans believe the country is on the wrong track.

Chris Cuomo Suspended Indefinitely Due To Communicatons With Brother