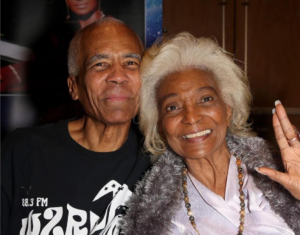 Star Trek star Nichelle Nichols stepped out to receive her roses at a special farewell dinner during her final Comic Con appearance.

The veteran sci-fi star has been a staple in the comics industry since playing communications officer Nyota Uhura aboard the starship Enterprise in the original Star Trek series, which ran from 1966 to 1969. Nichols, a regular at Comic Con over the years, has always been celebrated for being an early representation for Black women in mainstream television.

Nichols has made fewer public appearances since being diagnosed with dementia in 2018. Her ailing health has put her in the middle of a messy conservatorship battle between her family and close friends.

Over the weekend, the Los Angeles Comic Con hosted a special farewell dinner in Nichols’ honor that included a farewell dance and video tribute to the 88-year-old TV star, Daily Mail reported. Sitting in an assisted wheelchair alongside her son Kyle Johnson, Nichols beamed with pride throughout the celebratory event. Johnson smiled watching his mother receive praise from all in attendance.

“A life well-lived is reward enough, every day, and my mother’s certainly had a life well lived in many respects,” Johnson told the audience.

“This is an exceptional recognition, and I’m of course very proud of her for all that she’s done, and the value and the meaning of her work. Not just as an actress, but very real and important work that she inspired and enabled people to understand.”

Among those who helped to honor Nichols included Dr. Mae Jemison, a former NASA astronaut who became the first Black woman to travel into space on the Space Shuttle Endeavour in 1992. Jemison shared parts of Nichols’ story and the history she made over the course of her career. It was Nichols who aided in Jemison’s NASA career after she recruited women and minorities into the space program in the 1970s and 1980s as a result of her Star Trek fame.

Others in attendance included her younger sister, Marian Michaels, and actresses Judy Pace and Beverly Todd. Nichols posed for photos and signed autographs and got out of her wheelchair to dance. A number of tribute panels highlighting Nichols were on display throughout the convention.