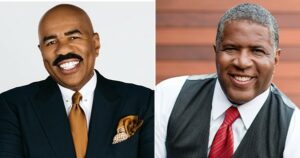 Now the acclaimed comedian, television show host, entrepreneur and philanthropist is taking his longstanding passion to new heights and officially signed on as a strategic partner with the Student Freedom Initiative.

The Harveys’ participation helps more than triple the number of schools participating in the Student Freedom Initiative from 9 to 29, impacting nearly 80,500 students.

“Access to quality, affordable higher education is one of the most important steps our community can take towards achieving racial equity,” says Harvey, a former stand-up comedian and host of the long-running television game show Family Feud.

“My team and I are proud to support the work of Robert F. Smith and the Student Freedom Initiative to highlight the outstanding job done by HBCUs and other MSIs to elevate the social and economic mobility of our students to achieve their greatest potential.”

The Steve and Marjorie Harvey Foundation is an organization in which he shares with his wife dedicated to cultivating the next generation of responsible leaders by providing educational enrichment, mentoring, life transformation skills and global service initiatives.

The Student Freedom Initiative’s team has expressed excitement over the Harveys’ decision to lend their celebrity and expertise to their philanthropic passion project.

“We are pleased to welcome the Steve and Marjorie Harvey Foundation in support of our critical mission to advance the narrative surrounding minority-serving institutions and the students they support,” says Smith, best known for nabbing headlines in 2019 when he gifted $34 million to Atlanta’s historically Black Morehouse College, paying off the student debt of the entire graduating class, a total of 400 students.

“Together, we look forward to sharing and promoting the extraordinary talent of our students in a competitive global economy. Expanding the number of participating HBCUs in the Student Freedom Initiative program and partnering with the Steve and Marjorie Harvey Foundation are two major steps towards closing the wealth gap and creating a lasting impact on the entire HBCU and MSI ecosystem.”

A hallmark of the Student Freedom Initiative is providing an alternative funding source that helps students and their family members avoid taking out student loans, such as Parent PLUS loans, which are unsubsidized federal loans with exceedingly high-interest rates and fees.

A growing body of research confirms that students of color, especially Black students, are overburdened with crushing, disproportionate levels of student debt. For example, more than 70 percent of Black students go into debt to pay for higher education, compared to 56 percent of white students, according to the American Association of University Women. The Brookings Institute finds that the Black-white disparity in student loan debt more than triples after graduation, with Black college graduates owing $7,400 more on average than their white peers, often adversely affecting their creditworthiness, ability to save money or build wealth.

Currently, the Student Freedom Initiative is offering science, technology, engineering, and mathematics (STEM) majors at an initial cohort of HBCUs to apply to receive grants of up to $20,000 per academic year to pay for their schooling, filling in any funding gaps that persist after they receive any other financial aid awards. Students are asked to back the money they owe back into the fund “pay it forward style” to benefit future students in need, but only after they have graduated and are working. The repayment amount is based solely on their income. The nonprofit is also helping to give HBCU students a leg up in their careers through a partnership with the internX.org program, connecting them with training resources and internship and job opportunities at Fortune 500 companies.

Finally, through its strategic partnership with Cisco and AVC Technologies/Computex, the Student Freedom Initiative is also providing pro bono technology infrastructure upgrades to a select number of HBCU campuses, in an effort to protect them from the threat of potential cybersecurity attacks, much like the ransomware attack that recently crippled Howard University.

A Strategic Partnership For The Culture

Student Freedom Initiative Executive Director Mark Brown says the partnership with the Harveys’ builds upon the progress the nonprofit has made over the last year and a half, building out a scalable infrastructure and establishing strategic partnerships to increase the resilience of MSI institutions and the global competitiveness of their students. “Now in our second year, we look forward to continuing to grow the number of participating institutions in our program to other Minority Serving Institutions and to serve more students,” says Brown, an alum of historically Black Tuskegee University in Alabama.

“We are also grateful to the Steve and Marjorie Harvey Foundation for its leadership and for joining us on this journey.” Harvey says he too is excited about growing the new partnership: “We look forward to other partners joining us in supporting what started with Morehouse College, but now encompasses the totality of the ecosystem who seek to achieve an enduring, scalable solution,” he says.

For more details about the Student Freedom Initiative, visit StudentFreedomInitiative.org