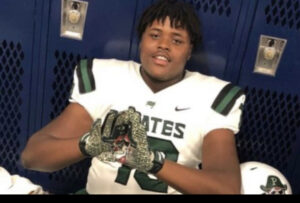 A student-athlete has died after an elevator accident took place at a student housing complex in Atlanta.

JauMarcus McFarland, 19, was at 444 Suites Student Housing for Champion Prep Academy in Northeast Atlanta when authorities say an elevator collapsed on him, leaving McFarland pinned between floors for more than an hour, according to FOX 5 Atlanta.

Authorities arrived on the scene after a 911 call from an eyewitness student saying a young man in his 20’s had been pinned inside an elevator.

The elevator was in a building that was being used as temporary student housing. McFarland’s friends tried to pull him to safety but were unsuccessful.

According to reports, it took firefighters over an hour to free McFarland. He barely had a pulse when he was rescued from the elevator. McFarland was rushed to Atlanta Medical Center where he went into cardiac arrest and died moments later.

A photo of the elevator shows it has not been inspected since August 2020. The property manager claims the inspection was not overdue and that the 16 athletes who were inside the elevator when it collapsed put the elevator 1,000 lbs. overcapacity.

The agency is responsible for inspecting elevators in Georgia. A spokesman issued a written statement to FOX 5 Atlanta saying:

“We can confirm that the operating permit for the elevators at this location expired in August of 2020. Inspections are required by state law to be done on an annual basis and it is the building owner’s responsibility to request this yearly inspection from our office. We do not have a record of any such request from this building.”

Officials say the elevator will remain shut down until a state inspector investigates the cause of the collapse.

McFarland Was Turning His Life Around

McFarland was a native of Missouri. He moved to Atlanta to attend Champion Prep Academy and pursue his dreams of playing football.

McFarland’s family, friends, and coaches were devastated by his death.

“It just hurts because he was starting to change his life around,” his cousin Demetrius Mays told KMOV. “He was happy to play football again, to get away, to try to make it out of where we’re from. Because where we are from, a lot of people don’t get a lot of chances.” He said.

There is a GoFundMe set up to help pay for McFarland’s funeral. CLICK HERE to make a contribution.