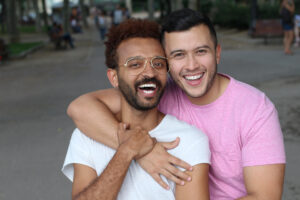 Despite the advances in science and technology over the years, new statistics show that the rate of new HIV infections in Black and Hispanic men hasn’t declined over the last decade, Stat News reports. The findings reflect a need for improved access to and use of HIV services for Black, Hispanic, and young men between 25–34.

Officials say breaking HIV-related stigma that contributes to unequal outcomes will be essential to ending the HIV epidemic in the United States. While new HIV infections among gay and bisexual men declined 8% over the last decade, the report found rates increased among gay men between 25–34. The biggest decline was among white gay and bisexual men.

Among Black and Hispanic/Latino gay and bisexual men, rates stayed the same. Overall results among gay men accounted for two-thirds of new HIV infections in the United States in 2019 despite the community only representing approximately 2% of the adult population.

“To end the HIV epidemic, we will need to address systemic factors that turn health differences into public health injustice. That starts with recognizing that HIV disparities are not inevitable,” Daskalakis said.

Working to achieve equity for gay and bisexual men of color requires tearing down barriers to testing, prevention, and treatment.”