The Caribbean Courtyard Villa is located in Puerto Viejo, a coastal town in southeastern Costa Rica. Tucked away in a jungle, the 495-square-metre rental home sits on a gently sloping site near Chiquita Beach.

Studio Saxe, which is based in San José, aimed to create a villa that embraced the tropical setting.

The architects conceived a series of pavilions organised around a central courtyard with a swimming pool. The pavilions are connected by pergolas.

“We designed a strategy of aggregation by creating a network of triangular pergolas that can grow or contract, depending on the necessity of the client throughout the project,” the firm said.

There are five pavilions. Four are identical, square-shaped modules that hold a bedroom and bathroom.

The fifth pavilion is a large rectangle that encompasses an open-concept kitchen, dining area and living room. It also holds a master suite.

The pavilions are raised above the ground and are covered with hipped roofs. Each sleeping module has its own sheltered patio, which is accessed via a glazed, sliding door.

The interior rooms feature earthy materials and neutral colours, including ample use of woven decor.

In both the bedrooms and public area, ceilings are covered with honey-toned, wooden slats. 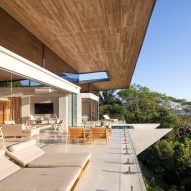 Occupants circulate between the different pavilions by walking under the pergolas, which are made of metal and wood.

“The project was conceived as a series of objects placed around the property and within existing trees,” said the architects.

The villa also steps down the hillside, further helping the architecture blend with the terrain.

The project has a number of sustainable elements, including rooftop solar panels and water-efficient systems. The villa is intended to “set a new example” for designing in Costa Rica’s tropical, coastal regions.

Other Costa Rican projects by the firm include a pair of beach houses that feature wooden screens and overhanging roofs, and a coastal dwelling that consists of pavilions wrapped in teak and glass.

The photography is by Andres Garcia Lachner.

How to Cook Lobster - Spend With Pennies