Wooden screens are used to form walls and overhanging roofs in this duo of Costa Rican beach houses by local firm Studio Saxe, which integrate the surrounding jungle into their design.

Dubbed Naia I and Naia II, the homes were created side by side for the same owner in Santa Teresa, a small town on Costa Rica’s Pacific shoreline.

A lush forest covers the lot, which the architects wanted to integrate into the design of the homes.

“We decided to blend the tropical jungle into the houses whilst creating bioclimatic comfort for people to enjoy the outdoor experience,” said San José-based Studio Saxe.

Of the two houses, Naia I is slightly smaller and comprised of a single-storey structure that is covered by an overhanging roof. The 251-square-metre residence has three bedrooms, each with its own ensuite.

An unenclosed walkway cuts through the home, leading to a pool in the backyard. Communal areas are located on one side of this passage and bedrooms on the other.

“Set within walking distance of the beach, the home is composed of generous rooflines that create shelter and the possibility of living outside within nature,” Studio Saxe explained.

Naia II features three bedrooms across two levels but uses a similar scheme, in which a walkway helps to delineate public and private areas.

The main living room is mostly open to the elements. Its steel structure forms a double-height space, within which only the kitchen rests against a solid wall. 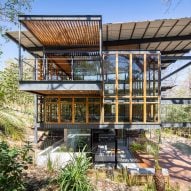 “The main living spaces are composed of lightweight steel frames that hold open spaces that welcome nature inside with long rooflines that are made of steel and covered in teak,” said Studio Saxe.

In both houses, the bedrooms feature concrete walls for privacy and the floors were given a glossy finish that contrasts with the dense surrounding forest.

Studio Saxe is led by Benjamin Garcia Saxe. The studio is based in Costa Rica’s capital San José and was established in 2004.

Other buildings completed by the firm include a yoga retreat designed with a “simple, low-key, modern tropical architecture,” and another home in Santa Teresa that supports an overhanging roof with slender steel columns.

Photography is by Andres Garcia Lachner.

Random: Sakurai Doesn't Appreciate Being Featured In Some Memes