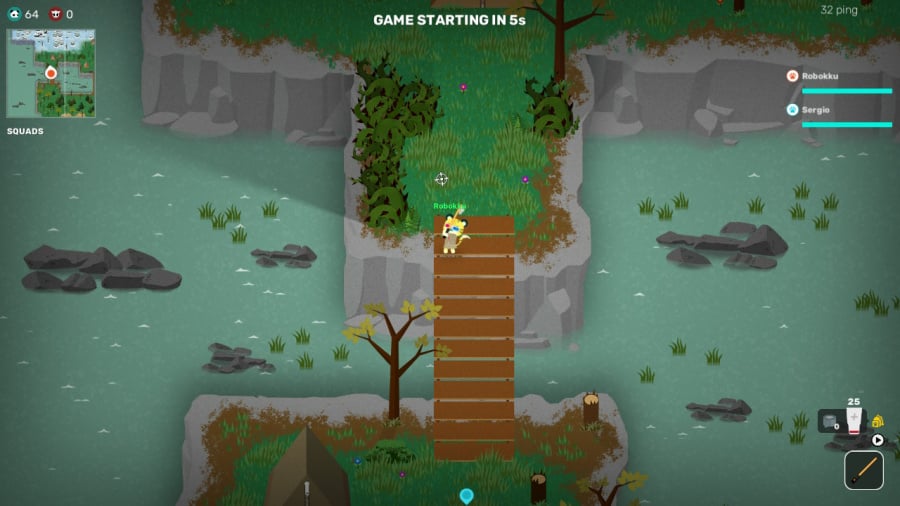 Super Animal Royale is an animal-based, free-to-play, 2D, top-down, 64-player, crossplay battle royale with premium cosmetics. That’s a lot of concepts piled up on top of each other – and it shows how our gaming vocabulary has expanded over the last decade or so. There are notions here that you would have had to explain in detail in the early 2010s but which are now indispensable shorthand for core gaming fundamentals. These are familiar ideas but combined in a new way and the result is tons of fun.

If you nearly stopped reading at “free-to-play” then you won’t need telling about the low points in the history of that monetisation strategy. There’s the “free-to-play-at-first” model, the “pay-to-win” model, the “pay-not-to-wait” model and the concept of the “whale” – the problem overspender who ensures a game’s economic viability at the expense of their own. With all the psychological manipulation involved in loot box gambling and layered in-game currencies blurring with real ones, it’s understandable that “F2P” has become a scary term. 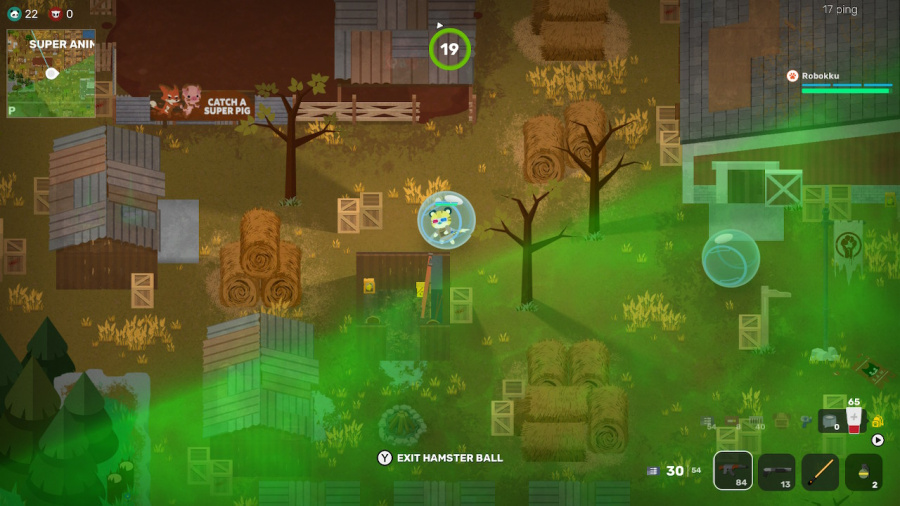 However, Super Animal Royale doesn’t do anything too egregious with its monetisation model. First of all, the payable stuff is all completely cosmetic, so you can genuinely play as much as you want for free and have all the fun of the gameplay. Second, it doesn’t go down the loot box route, so that gambling discussion needn’t rear its head. Nevertheless, it does make use of time-limited items to stir up some FOMO and it lets you accelerate in-game currency collection by purchasing passes, both of which generate a pull that goes beyond a clearheaded exchange of cash for goodies.

To Super Animal Royale’s absolute credit, though, its dense and intricate home screen, laden with tiny text and seemingly bottomless shopfronts and unlockables, is adorned with one giant button marked “Play”. If you want to ignore everything and just play the game, it’s perfectly easy to do so. Customisation options will accrue as you play, should you want to see them later. Creating an account will let you carry your characters and stats to other platforms but that is also skippable with a one-time choice.

There are options for solo, duo or squad game types, server locations, a toggle to fill the server and another for crossplay. After hitting play, the pre-game “lobby” is a large outdoor space – a corner of the battle map – where you can run around and freely whack other waiting players with your (customisable) melee weapon. This is a good chance to show off your character and kit, and see just how much variety is out there. In our time with the game, a 64-player server would regularly fill in under a minute, even without crossplay enabled. 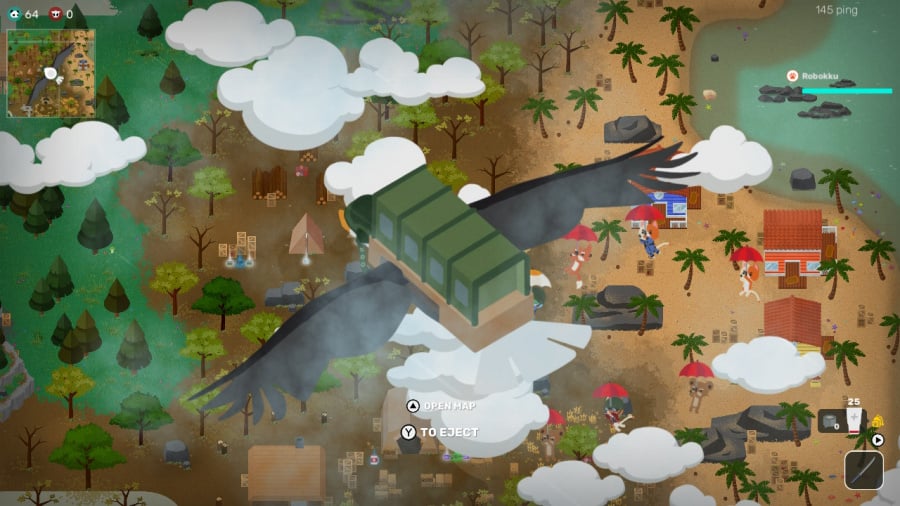 The play itself is classic battle royale. You choose your drop point as an eagle transporter crosses an abandoned safari park, then you scrabble for weapons and items before a ring of skunk gas tightens around the arena and draws survivors together. Matches are short, usually wrapping up in close to five minutes, and of course shorter if you have a bad one. Combined with the one-minute turnaround to start another, it’s a fantastic game to dip into and there always seems to be time for one more go. The conviction that you’ll do better next time is addictive and the berserker bloodlust as the ultimate one-on-one arrives is a thrill.

The game plays as a twin-stick shooter like Robotron: 2084 – a retro callback that’s a welcoming dash of classic gaming in such a modern affair. You move with the left stick and aim with the right, all on the 2D plane. Combined with a jumping roll manoeuvre, which boosts speed and dodges attacks but pauses your own fire, there’s a sense of athletic dexterity that feels cool to control. Add in the “fog of war” system – where items and enemies are not visible unless your character has line of sight – and you have the beginnings of a very fluid tactical shooter. The tactical satisfaction is heightened in squad mode, where an organised team of four can coordinate with delightfully lethal effect – if you’re lucky enough to find a competent squad. 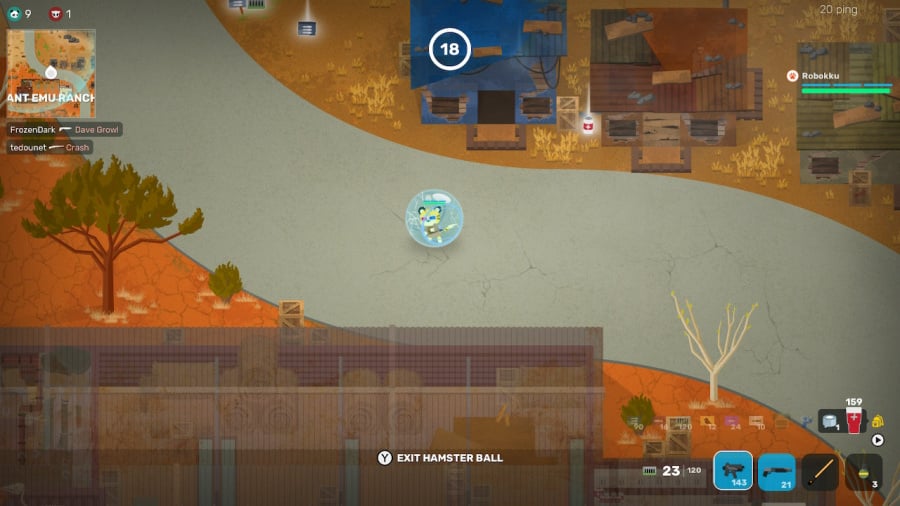 That is perhaps the first sticking point with the Super Animal Royale proposition: the impact on the game of poor players. It’s always going to be a mixed bag with a busy new free-to-play game, but the player count in a solo game typically drops under 30 in no time at all, so the arena can sometimes feel too empty before the skunk gas closes in. The game has been balanced over a couple of years on PC, so perhaps this will settle after the launch period on Switch and other consoles.

Our second gripe is with performance. Here, too, it’s important to have realistic expectations: out of 64 players, there are bound to be some ropey connections. However, several times we found ourselves in intolerably bad network situations right through to the final players. We found play to be more reliable connecting from the UK to a North American server than to a European one with a much lower ping. At the best of times, the gameplay is smooth enough to enjoy, although not achieving the 60 frames ideal for a competitive action game. Most of the time, though, the frame rate did not feel like the limiting factor.

Having said that, there’s enough charm in the Super Animal Royale package to carry it through the odd dodgy match. The characters and cosmetics are fun, varied and attractive, and the game world is more than just functional. There are secrets and story milestones and lore to be unearthed if you have chance amidst the frenzy of battle. The setting of an abandoned safari park is a stroke of genius and a joy to explore even after many, many matches.

The concept of Super Animal Royale is very now – it draws on all the familiarities of modern mainstream gaming. In a way, then, you could say it’s cutting-edge. In another way, though, it’s all just very familiar, to the point that it’s strangely unremarkable. No individual aspect of it stands out, but it does form an endearing whole. It feels cool to play (when there’s no grievous lag), the map is compelling and the battle royale formula is as much of a buzz as ever. The monetisation model is not in-your-face and the player base is certainly there. It’s free, it’s under a gigabyte, it’s fast, and it’s a good laugh. Why not download it?

How to Become an Audiobook Narrator