This review originally went live in 2006, and we’re updating and republishing it to mark the arrival of N64 games on Nintendo Switch Online.

Mario’s first foray into the world of 3D is regarded by many — most, even — as one of the greatest video games of all time, and with good reason. It ranks as the first really convincing realisation of a 3D world in a platform game and it introduced the concept of analogue control to a generation of console gamers, setting the template for hundreds of imitators that would follow, and the standard by which all 3D platformers would be judged forevermore.

For those who scandalously haven’t got around playing this unimpeachable classic, the story will be familiar, at least. As usual Princess Peach has been kidnapped by the wicked Bowser and it’s your job as Mario to rescue her. 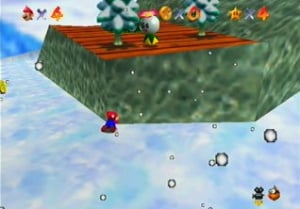 The Princess’s Castle forms the hub for this great adventure. Each different room contains a canvas which when jumped through will transport you to a rather unique world. Upon entering a world a challenge is presented which allows you to gain a star and exit the land — you can return several times to the same world to complete a new challenge in order to accumulate enough stars to open more elusive locked doors and progress through the castle. Eventually you’ll confront Bowser face-to-face and, with any luck, say ‘so long’ before returning Peach home in time for tea and medals. And cake.

There’s so much to praise in this game, but the sheer variety of Super Mario 64 is probably its greatest genius. You can race a giant penguin down an icy slope, plunder a sunken ship, scale twisting towers and have adventures in desert pyramids. You will not get bored quickly, that’s for sure.

Perhaps more remarkable is how solid and polished it all feels. 3D platform games can often be hampered by a ropey in-game camera, but Lakitu performs his job as camera operator admirably here. The viewing angle is nearly always superb for keeping you in the action and assisting with traversing more complex environments.

I mean, what else is there to say? The fact that Mario still controls more-or-less identically even now indicates just how much Shigeru Miyamoto and his team got right first time. Going back these days, it’s almost shocking how well-rounded the experience is and how crisp the controls still feel. If you weren’t there in 1996, it’s tough to convey quite how revolutionary this felt having only played 2D 16-bit platformers to that point.

Ultimately, what you’ve got here is the greatest launch game ever made; the perfect introduction to a new piece of hardware showcasing gameplay that simply wasn’t possible previously and pointing to the promise of things to come. Use the controller the game was designed around if possible (a recommendation I’d make for any game), but however you play it, you’re sure to have a brilliant time.

Finishing Super Mario 64 won’t take you too long, but as with most Mario games it will take you weeks (and quite possibly months) to discover all the secrets within. The controls are as good as they ever were and unless you’re a particular fan of the DS port’s extra characters and other bonuses, there’s really no substitute for the original.

Mario emerged into the 3D realm fully-formed and exceptionally well-realised. This doesn’t feel like a rough sketch or a first stab at using new technology. Unlike so many games, there’s no sense here that the developers would ‘get it right’ in a sequel; however improbably, Nintendo nailed practically every aspect on the very first try. Super Mario 64 was a momentous achievement, and one that still feels fresh — and fun — decades on. It comes with our highest recommendation.

Rare's N64 Classic GoldenEye 007 Is No Longer "Banned" In Germany