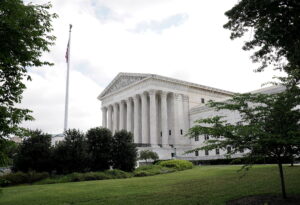 Reuters – The U.S. Supreme Court on Monday signaled that it is not retreating from its inclination to grant a legal protection called “qualified immunity” to police accused in lawsuits of using excessive force, ruling in favor of officers on Monday in separate cases from California and Oklahoma.

The justices overturned a lower court’s decision allowing a trial in a lawsuit against officers Josh Girdner and Brandon Vick over the 2016 fatal shooting of a hammer-wielding man in Tahlequah, Oklahoma.

They also overturned a lower court’s decision to deny a request by police officer Daniel Rivas-Villegas for qualified immunity in a lawsuit accusing him of using excessive force in 2016 while handcuffing a suspect in Union City, California.

The brief rulings were unsigned, with no public dissents among the justices in the cases, both decided without oral arguments.

The qualified immunity defense protects police and other government officials from civil litigation in certain circumstances, permitting lawsuits only when an individual’s “clearly established” statutory or constitutional rights have been violated.

The rulings indicated that the justices think lower courts still are denying qualified immunity too frequently in police excessive force cases, having previously chided appeals courts on that issue in recent years.

“These are not the actions of a court that is likely to end or seriously reform qualified immunity,” Chris Kemmitt, a lawyer with the NAACP Legal Defense and Educational Fund civil rights group, wrote on Twitter.

A 2020 Reuters investigation revealed how qualified immunity, with the Supreme Court’s continual refinements, has made it easier for police officers to kill or injure civilians with impunity.

In the Oklahoma case, police responded to a complaint by the former wife of the slain man, Dominic Rollice, that he was inebriated and in her garage.

Officers told Rollice they were not there to arrest him, but rather to give him a “ride out of there,” according to court papers, but he refused to go with them. A lower court found that the officers then advanced on Rollice, prompting him to back up and grab a hammer that he held above his head and refused to drop.

When Rollice appeared to raise the hammer further, Girdner and Vick fired multiple times, killing him. A third officer had decided that the situation called for him to “go less lethal” by putting his firearm in his holster and using his stun gun instead.

Rollice’s estate sued Girdner and Vick, accusing them of using excessive force in violation of the U.S. Constitution’s Fourth Amendment prohibition on unreasonable searches and seizures. The police said they used force because they feared Rollice would charge at them or throw the hammer.

The Denver-based 10th U.S. Circuit Court of Appeals in 2020 denied the officers qualified immunity, finding that they may have unjustifiably escalated the situation. The Supreme Court on Monday declined to decide “whether recklessly creating a situation that requires deadly force can itself violate the Fourth Amendment,” instead saying that no prior case had “clearly established” that the officers’ actions were illegal.

In the California case, the justices ruled in favor of Rivas-Villegas for the same reason. That case involved the arrest of a man named Ramon Cortesluna at his home. Rivas-Villegas used his foot to push Cortesluna down, and then pressed his knee into the man’s back while another officer handcuffed him.

The San Francisco-based 9th U.S. Circuit Court of Appeals last year ruled that Cortesluna’s excessive force claim could go to trial, noting that the suspect had been prone and not resisting.

Congressional Democrats have sought to rein in qualified immunity as part of legislation to reform police practices. The House of Representatives passed a Democratic-backed bill that would eliminate qualified immunity for law enforcement, but Senate talks between Democrats and Republicans on police reform collapsed last month.

(Reporting by Andrew Chung in New York; Additional reporting by Lawrence Hurley in Washington; Editing by Will Dunham)

How I Get Through Hard Times Using Curiosity, Compassion, and Challenge