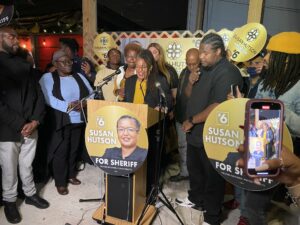 Hutson defeated Gusman in Saturday’s runoff election, receiving 53% of the vote. In the initial election, Gusman had a 13 point lead over Hutson, but the race went into a runoff because neither candidate received 51% of the vote.

Hutson’s campaign focused on criminal justice reform, including opposing an 89-bed expansion of the parish’s jail and reducing its population providing gender-conforming housing, ending the city’s contract with the jail’s healthcare provider, and ending charges for phone calls to inmates.

“History has been made,” Hutson said in a statement on Facebook. “I am so proud and humbled to call myself your next Sheriff. A huge thank you to all of our campaign staff, our community organizers, the religious community, nonprofits, neighbors, and friends.”

“Let’s get to work,” Hutson added.

Hutson has served as the independent police monitor for the New Orleans Police Department for the last 10 years. The position was created in 2008 by Orleans Parish voters to establish the office responsible for overseeing changes to the city’s police departments.

In her victory speech, Huston thanked the community organizers and volunteers who pushed her to victory and asked them to keep her honest when she takes over as sheriff.

The loss is tough for Gusman, who has been a part of the city’s political elite since serving as a youthful department chief under former Mayor Ernest Morial, who served from 1994 to 2002. In his concession speech at the Treme Theatre, Gusman stayed positive, asking his supporters to keep looking forward.

“Let’s look up; let’s not look down. Let’s look ahead and not look back. Let’s think about how we can get better and keep getting better,” Gusman said according to the New Orleans Advocate.

In the final days running up to the election, Gusman launched a series of attacks against Hutson, accusing her of being a puppet to out-of-state special interests. However, Hutson fired back, pointing to the significant number of inmate deaths and the fact that Gusman was forced to cede authority of the Orleans Parish jail to a court-approved compliance director in 2016.