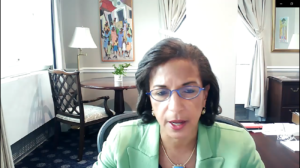 “It’s the most transformative investment in children and caregiving in generations,” Rice said during a press call Friday morning. “Right now, Black families are two times more likely than white parents to have to quit or make a major change in their job due to child care disruptions.”

According to Rice, Biden’s bill will ensure Black families of four, earning less than $300,000 a year, pay no more than 7% of their income on childcare. The bill will also expand pre-K and enable Americans to have four weeks of paid family and medical leave.

West Virginia Sen. Joe Manchin, whose opposition to several aspects of Biden’s bill is currently holding it up, has fought against paid family leave, saying he wants both parties on board with a bill that would not increase the national debt.

Rice added that the bill would also represent the biggest expansion of affordable healthcare coverage in a decade and close the Medicaid coverage gap, affecting more than 500,000 Black and Hispanic Americans in 12 states. The bill will also lower healthcare costs for those buying coverage through the Affordable Care Act by extending American’s Rescue Plan’s lower premiums. The extension will save 360,000 Black Americans $50 per person, per month.

“With these changes, more than one in three uninsured Black people across the U.S. will gain coverage, Rice said. “Additionally, more than 5.8 million Black people on Medicare will benefit from the reductions in prescription drug costs and added hearing coverage.”

Additionally, the Build Back Better plan will invest more than $3 billion in maternal coverage, which will disproportionately benefit Black women who die from complications related to childbirth at three times the rate of white women. According to Rice, Biden’s bill will cut the Black poverty rate in the U.S. by 34% and the child poverty rate by almost 50%.

The bill will also help those stepping out on their own for the first time to get a degree in higher learning.

The bill will increase the maximum Pell Grant amount, which is used by the majority of Black Americans attending or trying to go to college. It will also make a historic investment in the nation’s historically black colleges and universities. In the bill, $10 billion is slated to go toward HBCUs and Minority Serving Institutions (MSIs).

Another $2 billion will specifically go to HBCUs, and $4 billion in research and development grants will enable HBCUs and MSIs to compete for resources that will enable them to become cutting-edge institutions.

The bill will also attempt to reverse decades of housing issues minorities have faced, including rising rents, upgrades in public housing, and a shortage of housing options.

Biden Build Back Better plan makes the largest investment in affordable housing in U.S. history. Currently, one-third of Black renters pay half their income in rent. The bill will help build and improve more than one million affordable homes and make badly needed improvements to public housing and vastly expand the availability of housing choice options.

As part of the infrastructure portion of the bill, Biden’s will invest $65 billion to provide universal broadband access.

The coronavirus pandemic exposed just how much a lack of reliable internet can hurt people of all ages. Last year, during the height of the pandemic, two girls went viral in California for studying outside in a Taco Bell parking lot because it had consistent internet access.

According to the Popular Reference Bureau, in 2018, roughly 10% of U.S. children ages 5 to 17 did not have a computer—desktop, laptop, or tablet—at home, and 23% did not have home access to paid high-speed internet.

The pandemic has likely made those numbers worse and while schools have stepped in with tablets and laptops, finding reliable internet is still a significant hurdle for low-income Americans across the country.

Rice also discussed other factors of Biden’s bill, including nutrition security for children, tax cuts for children and workers without children, workforce training, and a $555 billion climate change plan to make changes and upgrades in clean energy, including electric cars and green energy.

Barbara Collins, The First Black Woman From Michigan Elected to Congress, Has Passed Away