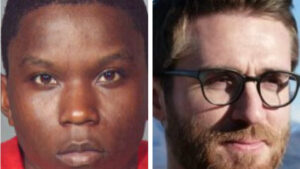 A man arrested for killing a Columbia University college student is no stranger to the justice system.

According to The New York Post, 25-year-old Vincent Pinkney was arrested for allegedly stabbing 30-year-old Davide Giri, a Columbia University student, to death last week in New York City’s Morningside Park. The suspect is also accused of injuring a tourist and threatening another man in an attack labeled as unprovoked. The fatal stabbing took place near the Columbia University campus on Thursday night.

According to papers filed in Manhattan Criminal Court, the Columbia grad student had desperately called out for help before he collapsed from his wounds as the random assault was caught on video.

As he stumbled to the ground, Giri reportedly blurted out, “Help! I have been stabbed!”

PIX 11 reported that Pinkney is facing charges of murder, attempted murder, assault, attempted assault, and three counts of criminal possession of a weapon, according to the NYPD. He has 11 prior arrests dating back to 2012 that include robberies and assaults and other alleged crimes. He is currently on post-release supervision until 2022.

The tragic incident started when Giri, a grad student from Italy, was stabbed in his stomach in Morningside Park just before 11 p.m. He stumbled out of the park and fell near the corner of West 123rd Street and Amsterdam Avenue, where police officers discovered him. Giri was later pronounced dead at Mount Sinai-Saint Luke’s Hospital.

Another victim of Pinkney was a 27-year-old Italian tourist who had just gotten into the city the day before. He was found with stab wounds to his torso at West 110th Street and Cathedral Parkway, roughly 15 minutes later.

Witnesses told cops the suspect had approached the male victim from behind and knifed him in the back before escaping. The second victim was taken to the same hospital as Giri and is stable.

Footage from surveillance cameras “depicts a man wearing a red hoodie under a dark jacket approach Davide Giri from behind, make a stabbing motion, and then Giri runs away” before he stumbles to the ground.

Doctors from the hospital where Giri was pronounced dead said he “suffered a stab wound that punctured his vena cava and caused him to die,” the complaint said.

The suspect, according to sources, is a member of the Everybody Killa or EBK street gang. He was convicted of gang assault in 2015 after he and three others beat and slashed a man in Jamaica two years earlier. He served fewer than three years in state prison for that crime.

Liberty, Justice and Contracting Opportunities for All Our Entrepreneurs and Innovators

21 Free Things to Do During the Holidays