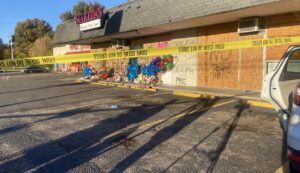 Within hours of a second shooting at the location where rapper Young Dolph was killed, Memphis authorities had apprehended three men, but are still unsure if there is a connection between the two incidents.

According to WREG, the shooting happened on Nov. 17, as fans gathered outside of Makeda’s Cookies, where 36-year-old Dolph had been fatally gunned down the previous morning. Authorities say three men were driving past the location on Airways Boulevard when they shot once into a crowd of mourning fans.

One man was hit and transported to the hospital with non-life threatening injuries.

Officers who were already at the scene of the high profile murder immediately chased down the Nissan carrying Terrance Jones, 23, Jailon Nelvis, 19, and Tavis McQueen, 22. The vehicle crashed minutes later, and the three began attempting to escape on foot.

As they did so, they discarded four handguns, which were recovered after the men were arrested, along with two more firearms found in the car.

Authorities have also identified Jones as the shooter. Memphis PD has not released any details indicating that they believe the two shootings are related.

On Friday, the owners of Makeda’s issued a statement about Dolph’s death.

“He was was family to us,” said Raven Winton, the store’s operations manager and daughter of owners Pamela and Maurice Hill. “Every time we saw him we didn’t treat him like a rap star, a rap artist. we weren’t trying to get autographs. Hey, it was basically…What’s up, Dolph. That man did not deserve that. He was just in there to buy cookies for his family. It’s terrible that we can’t even step outside of our house and feel comfortable in the neighborhood that he knew and loved and supported.”