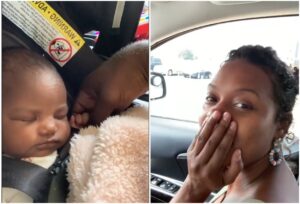 It has been quite a harrowing week for former American Idol contestant Syesha Mercado who was battling against an “unjust system” in Florida after authorities from the Manatee County Sheriff’s office snatched her second baby away and had all of social media and celebrity Kim Kardashian on the case to get her children Ast and Amen’Ra back.

Although Ra’ is still not with Syesha and her partner, Tyron Deener, on Friday he posted a heartfelt message on Instagram to report that 10-month-old Ast has finally been given back to their family, thanks to the media attention, celebrity voices, and high-powered attorneys who took up the case.

“We want to say thank you. We still got work to get Rah back. But because of y’all and my family we’ve had the proper support to get the best attorneys in the country to be able to bring justice,” Deener said. “Ast is back. We still gotta get Ra back.”

According to The Herald-Tribune, last week on Wednesday morning, Manatee County sheriff’s deputies surrounded a car occupied by Mercado, her 10-day-old baby girl, and the father of the child, Deener. The video clip shows a couple of police officers approaching the vehicle Mercado was riding in with her family. The police officers made them pull over, and two of the deputies gave them a court order to turn over the newborn infant for a checkup at the hospital.

Their daughter’s removal came months after authorities took their 18-month-old son from them following a trip to Johns Hopkins All Children’s Hospital in St. Petersburg for dehydration treatment on Feb. 26 where he stayed until late March.

Their son, Amen’Ra, was treated by Dr. Sally Smith, a pediatrician who was the subject of Torn Apart, an investigation where USA Today Network found the doctor had a history of diagnosing child abuse too quickly. He was placed into foster care over allegations of malnutrition.

The series of shocking events prompted celebrity Kim Kardashian to jump into the fray and urge her 70 million followers to take notice of the dire circumstances involving Mercado.

Everyone please read and spread this story is absolutely heartbreaking. How a mother could go and seek help for her baby that is not wanting to eat, they take the baby into foster care and remove her newborn baby with no reports of abuse @Syesha https://t.co/OhVndrWKyo pic.twitter.com/2BwUnEgpqM

Less than a week after Kardashian’s post, Mercado had her baby returned.

Power to the people.