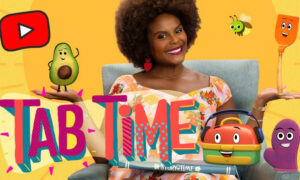 YouTube Originals announced the Dec. 1 premiere of “Tab Time” on Thursday with the release of an official trailer featuring Tabitha Brown as the host of the upcoming preschool series.

In each of the series’ 10 episodes, Brown shares her vegan cooking, storytelling and motivational speaking with children, teaching them to live their best life. Each week, she’s joined by two children and a celebrity guest who’ll star as a Super Cool Expert in Tab’s Lab.

Together, “Ms. Tab,” as the children call her, DJ Khrafty (Jermaine Fowler), and their guests will craft activities that kids can also do at home.

“‘Tab Time’ is part of my purpose. Over the last few years, I feel I have been called to heal the world and healing the world starts with children. If we can create better children, then we can create better adults,” Brown said in a press release. “Teaching children to grow together and love each other with kindness will create a better world. We’re at a place right now where the world needs healing, it needs light and children are that light. It’s been said a million times, but children are the future and healing change begins with them.”

Nadine Zylstra, Head of Family, Learning and Impact for YouTube Originals, believes “everyone could use a bit of Ms. Tab’s positive energy in their life, which is exactly why we brought this show to our platform.”

Zylstra continued, “‘Tab Time’ is set in an inviting, respectful environment where our young viewers are encouraged to realize their own abilities and potential. But it’s also fun for older kids and parents to watch — there is a magic ingredient in this show that appeals to the whole family, and her name is Tabitha Brown.”

“Tab Time” is for all children with a special focus on ages 3-5. The show explores a variety of educational “truths” or themes; including family, helping others, music, how things grow and mistakes.