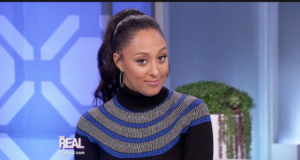 “They will take what you say, put it out of context of who they think you are and that is what happened for years on that show,” Mowry-Housley shared on the Lewis Howes podcast.

She also vaguely explained the behaviors she wishes she had been prepped for prior to taking the job.

“I will tell you this, being on a talk show and you can take it or leave it, it’s not a safe space,” Mowry-Housley said. “It’s not.”

Mowry-Housley announced her exit from The Real in July 2020 after seven years on the show.

“I had NO intention to talk about this today…but now some reports are coming out and I’d rather you hear it from me first,” she captioned an Instagram post.

By October, she was ready to open up about the decision.

“The girls will always be a part of my family,” Mowry-Housley told Entertainment Tonight about her former co-hosts Jeannie Mai, Adrienne Bailon Houghton,and Loni Love. “I may not be physically in front of the camera, [but] we will be a family forever.”

“It’s weird to say, but I feel like I’m still there…I still talk to the girls. I support the girls still, individually. I do it individually because they’re all doing their own thing.”

Well now it’s over a year later and Tamera is singing a new tune. She shared a number of heartfelt emotional moments while hosting the show and definitely doesn’t appear to miss working on The Real.