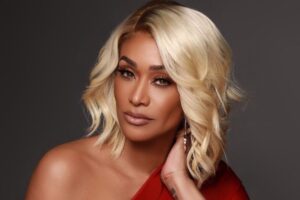 Tami Roman is well-known as an actress, businesswoman, and TV star. She recently returned to where it all started and reconnected with her old housemates on The Real World Homecoming: Los Angeles.

While she’s known for her bold, outspoken persona on Basketball Wives, fans watching The Real World reboot are reliving the early days of Roman’s TV career where she took a more timid approach while onscreen.

On the reboot, things got heated when she and her original housemate David revisited their 1993 controversy that resulted in him being kicked out of the house. While speaking with BLACK ENTERPRISE, Roman reveals how shocked she was by her old housemates’ response about the ordeal 28 years later and what it says about the importance of protecting Black women and the topic of consent.

While recalling the experience on the show, she confessed to battling body dysmorphia then and still struggling with the disease today. But the Ms. Pat Show star noticed a disconnect when it came to her housemates understanding the trauma she experienced from the ordeal compared to the sympathy they all had for David.

Roman followed up the TV reveal by opening up about her body dysmorphia during a recent appearance on The Real.

“It’s something that I don’t talk about often, so this is like the first time because I feel comfortable to talk to you ladies about it. I suffer from body dysmorphic disorder. I’ve been dealing with this since I was 13 years old. And so a lot of people don’t know it’s either hereditary or genetic or comes from a negative experience where your self-image has been annihilated,” she said.

During her deep dive with BLACK ENTERPRISE, Roman explains how she came to understand that she was battling body dysmorphia and explained the support she expected to receive from her more adult housemates nearly three decades later.

She also teases her upcoming projects and her possible cameo on The Real Housewives of Atlanta, thanks to her stylist, Marlo Hampton.

Press play below to watch the interview in full.

20 Photos to Inspire You to Visit Mallorca • The Blonde Abroad