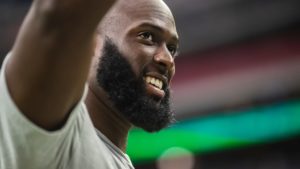 Tampa Bay Buccaneers running back Leonard Fournette announced that he has given $100,000 to local community organizations in Louisiana to support Hurricane Ida relief efforts.

It’s time to step up. The New Orleans community is being hit hard by Hurricane Ida and in need of the world’s support. I am supporting the following organizations in its relief efforts to provide my beloved city and its families, children and individuals with basic necessities. pic.twitter.com/lZTmO2P0Y4

“I want to use my platform to help out my city and everyone that is around Louisiana,” he said last week.

“Unfortunately, we didn’t get that,” he said about his experience braving Hurricane Katrina with his family.

He continued, “I donated $100,000 out of my own money just to help people out in New Orleans and all over Louisiana, whoever is going through something or whoever needed something. Tomorrow, I’m having a meeting with the team and to see who wants to give something to the funding to help out. That’s the big thing. Hopefully, it’s successful to help out those who are in need.”

The entire state of Louisiana has been devastated by Hurricane Ida. The Category 4 storm hit land with winds nearing 150 miles per hour with higher gusts. Millions remain without power as the city is experiencing a near blackout and many are still being rescued in the aftermath of the storm. This, as temperatures are reaching near the three digits.

For Fournette, the storm reminds him of Hurricane Katrina. He says he remembers being just 10 years old when Hurricane Katrina hit his New Orleans neighborhood, leaving it submerged. His family fled the city to an elevated stretch of Interstate 10.

“We had to go loot and get (food). We stole, like, a barbecue grill and was barbecuing for everybody on the bridge,” the 26-year-old Bucs said.

“It was crazy. You’re young, so you don’t really realize what was going on. But as you get older you realize the things you went through as far as a lot of dead bodies in the water and really having to start looting to try and survive,” he said at a Bucs presser.

For Ida, Fournette was able to get his family to safety in Tampa.

“Everybody’s here,” Fournette said of his family. “Before the storm, they left. They evacuated. So, everything’s going fine right now.”

Hurricane Ida knocked out power for over 1 million customers in New Orleans and the surrounding areas. Flooding is still a major issue. Fournette says he is now getting his teammates involved to help those in need.