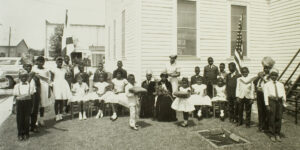 Richard Doby is the name behind Tampa, Florida’s forgotten African American town of Dobyville. But the white woman who lives in Doby’s house is working on getting Dobyville added to the Historic District.

Doby’s original home is still standing in what used to be an all-Black community that he created, Tampa Bay.com reports. Over time, the structure survived racist threats and drastic changes to the surrounding environment. Now the current homeowner is working to preserve the town’s history, even if it’s not her own.

“I have a responsibility to this house and its history,” Tara Nelan said. “It needs to be recognized for its importance.”

Nelan purchased the home in April 2020 and has been lobbying with her neighbors to have the historically-Black town of Dobyville preserved in the Local Hyde Park Historic District. The town once held a school and cemetery, which were all razed over the last century.

In the late 1800s, Doby saved up his earnings from delivering ice and collecting trash to invest in real estate, WTSP reports. In 1894, he purchased three acres in Robles Pond, another historic Black neighborhood. By 1902, he opened Zion Cemetery, believed to be Tampa’s first Black burial ground.

Doby invested in the West Hyde Park neighborhood, where he built his house, which developed into a Black community.

“He owned the school property and donated it for the school, and he owned the property where he lived,” the Tampa Bay History Center’s Rodney Kite Powell said. “He probably owned adjacent land and sold that to people for individual homes.”

While Dobyville is part of the National Hyde Park Historic District, it doesn’t hold a national designation which is symbolic in providing the neighborhood the same protections as the local historic designation.

“This isn’t about just preserving homes,” Dobyville resident Reese Riggle said. “It’s about recognizing that this neighborhood is a piece of history.”

Dennis Fernandez, Tampa’s architectural review and historic preservation manager, says “formal consideration” is being taken to add Dobyville to the local Hyde Park Historic District in March 2022. If the vote is approved, the final decision “resides with the city council.”