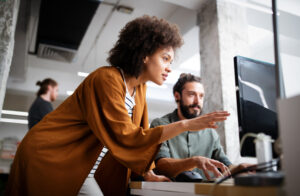 Pressured to do so largely after the death of George Floyd, a growing number of companies have applied  multiple approaches to boost workplace diversity.

But a strategy by a tech company that includes using white actors to imitate people of color to boost its diversity efforts is causing some controversy.

A corporate education firm,  Mursion offers human resources training to some of the world’s largest corporations. The company is reportedly telling such clients it uses virtual reality simulations to  help teach racial sensitivity. Mursion has supposedly produced virtual reality simulations for assorted clients where hypothetical scenarios are done between the participant and an animated human avatar played by live human actors. Those actors follow succinct plans while making up where they use voice modulators and remote controllers to switch between characters.

Based on simulations seen by and described to BuzzFeed News, Black avatars called out other characters’ acts of discrimination, asked participants to rally their companies support of Black Lives Matter, and practiced “supporting a traumatized employee through incidents of racial injustice.” Another plot had Child Protective Services remove a child from a Black family.

White actors played the roles of the Black characters in all the scenarios.

Mursion, which has some actors of color, defended its practice saying that “open casting” is needed to scale its business and to protect employees of color from having to just endlessly replay “the same cultural biases, microaggressions, and outright discrimination in our society that too many Americans suffer today.”

It added that its avatars are merely “hypothetical characters” that are not meant to stand in for “the entirety” of any culture, race, sexual orientation, or gender identity.

But that stance is being rebuffed. Scholars of race, theater, and digital media told BuzzFeed News that white actors playing characters of color in DEI simulations like Mursion’s could bring their own unconscious bias into scenarios aimed to mitigate bias.

And seven current and former Mursion employees expressed confidentially concerns on the firm’s own diversity and inclusion actions.

One employee described the use of white actors in Black roles as “a really tough thing for a lot of us to stomach.”

Three workers independently described a case where a white simulation specialist used the n-word while acting as an avatar of color. That actor now trains other simulation specialists. Among other statements, workers stated the company has failed to promote and support women employees of color.

For University of Michigan professor Apryl Williams, an affiliate researcher at NYU’s Center for Critical Race and Digital Studies, Mursion’s practice of using white actors to voice characters of color is “just blackface.” Broadly condemned now, “blackface” is tied to the historical use of white actors in makeup to caricature Black people in minstrel shows

In response, Mursion CEO Mark Atkinson told BuzzFeed News that his firm is working hard to improve its diversity and inclusion practices, and detailed multiple steps it has taken to address the lack of avatar diversity and support for employees of color. “We recognize that, as humans, we make mistakes,” reflecting on incidents of stereotyping. He denied any incident where a simulation specialist used the racial slur. BuzzFeed News reports the specialist did not answer a request for comment.

Learn How To Capitalize Through E-Commerce With This Shopify Bundle