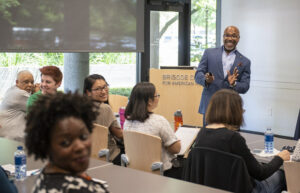 Mursion, a tech company which provides virtual reality diversity and inclusion training for corporations across the globe is now being questioned about its own internal DEI practices.

According to BuzzFeed, the company’s services includes creating virtual reality stimulations that allow participants to interact with animated humanoid avatars in hypothetical, racially charged scenarios. The avatars’ actions and dialogue are loosely scripted, allowing for human actors, called “simulation specialists,” to improvise as they bring the characters to life.

Mursion often tasks one specialist with playing multiple roles, using a voice modulator and remote control to alternate between characters.

In BuzzFeed’s investigation of the company’s practices, users described and demonstrated scenarios where Black avatars called out discrimination or rallied their coworkers to support Black Lives Matter. One atypical scenario involved the removal of a child from a Black family by Child Protective Services.

In each of those scenarios, the Black characters where played by white actors.

While Mursion told reporters that they use open casting – allowing actors of all races to play any and all characters – to keep their overhead down and grow their business, seven former employees told BuzzFeed that the practice had some immediate and direct real world ramifications.

“One employee described the use of white actors in Black roles as ‘a really tough thing for a lot of us to stomach.’ Two raised concerns about white actors mimicking Black dialect while acting as Black characters,” the website writes. “Three independently described an incident in which a white simulation specialist used the n-word while acting as an avatar of color. That actor now trains other simulation specialists. Employees also raised concerns about the visual creation of Mursion’s avatars, citing lack of variation in the skin tone, hair, and facial features of their characters of color, and about the company’s failure to promote and support women employees of color.”

In addition to the observations by former employees, experts explained that having white actors play minority characters leaves rooms for those individuals to introduce their own unconscious biases into the simulations.

Mark Atkinson, Mursion’s CEO, says the company has already taken steps to address the lack of diversity within their avatars and to support the company’s employees of color. He maintains he was never made aware of an incident in which a simulation specialist used racial slurs.