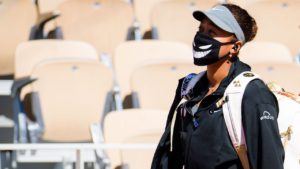 Naomi Osaka was ranked as Forbes’ highest-paid female athlete in 2021, but now the tennis star is thinking about taking a hiatus.

On Friday night, Osaka lost her third-round competition match to 18-year-old Canadian Leylah Fernandez. After an emotional defeat, Osaka expressed her uncertainties about the future of her tennis career.

“Basically, I feel like I’m kind of at this point where I’m trying to figure out what I want to do,” she shared, breaking into tears. “I honestly don’t know when I’m going to play my next tennis match.”

She added, “I feel like for me recently, like, when I win I don’t feel happy. I feel more like a relief. And then when I lose, I feel very sad. I don’t think that’s normal.”

An Unexpected Year for Osaka

Osaka has been the most talked about tennis player of 2021. The 23-year-old has earned over $50 million this year and landed lucrative brand contracts. She’s signed deals with Workday, Louis Vuitton, Tag Heuer, and Levi’s.  Surprisingly, less than 10% of her earnings are derived from her work on the court.

The four-time Grand Slam champion has been putting her mental health at the forefront of her goals this year. In May, Osaka announced that she wouldn’t participate in media appearances at the French Open to protect her mental health. Her decision led to a $15,000 fine. That’s when she dropped the news that had the internet in a frenzy: she was withdrawing from the French Open tournament.

“I would never trivialize mental health or use the term lightly,” she shared on social media in May. “The truth is I have suffered long bouts of depression since the US Open in 2018 and I have had a really hard time coping with that. Anyone that knows me knows I’m introverted, and anyone that has seen me at the tournaments will notice that I’m often wearing headphones as that helps dull my social anxiety.”

Nearly two months later, Osaka returned to the court for the 2020 Tokyo Olympics. She lost in a match against the Czech Republic’s Marketa Vondrousova but had the honor of lighting the iconic Olympic cauldron at the opening ceremony.

“When I lit the flame, I was super honored,” she stated. “I think that’s a position that you dream about and not anyone can do it. So, for me, when they asked me if I wanted to, I was very surprised but very honored. And I’m just very happy to be here and very happy to play — especially in Tokyo.”

Osaka Plans to Take a Break From Tennis

Friday’s U.S. Open experience may have been the final straw for Osaka this year. She won the 2018 and 2020 singles but loss the U.S Open to Leylah Fernandez, a Canadian who was ranked 73. Osaka expressed her disappointment by hitting a ball into the crowd, triggering a code violation and curious reporters.

“Yeah, I’m really sorry about that. I’m not really sure why. Like, I felt like I was pretty — I was telling myself to be calm, but I feel like maybe there was a boiling point,” Osaka admitted.

Osaka has struggled with the attention her athletic prowess has garnered, revealing the pressure of talking to members of the media often causes her mental anguish. But after her loss at the U.S. Open, she was candid about how she was feeling during a press conference.

WayForward On BloodRayne Betrayal: Fresh Bites And Bringing Back Bailey And Baker - Feature